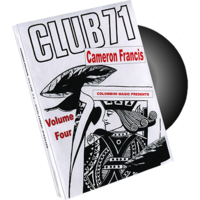 Today, when you order "Club 71 Volume Four by Wild-Colombini Magic", you'll instantly be emailed a Penguin Magic gift certificate. You can spend it on anything you like at Penguin, just like cash. Just complete your order as normal, and within seconds you'll get an email with your gift certificate.

FREE SHIPPING TO THE UNITED STATES.
+ Add to Cart
Review Wishlist
In stock: usually ships within 24 hours!
Order in the next 4 minutes and it will ship TODAY!
card
Tweet

The English magazine CLUB 71 ran from 1970 to 2007 and was produced by Geoff Maltby the owner of Repro Magic. For most of the time Walt Lees was the editor.