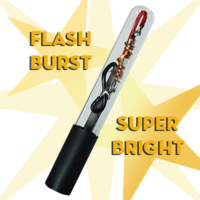 Today, when you order "Flash Burst (Super Bright) by Grand Illusions", you'll instantly be emailed a Penguin Magic gift certificate. You can spend it on anything you like at Penguin, just like cash. Just complete your order as normal, and within seconds you'll get an email with your gift certificate.

Flash Burst IS: A body-worn flash effect that causes a bright flash of light to pop from the center of your chest. Its handy for making things vanish or appear in a flash of light. Triggers by a pressure sensitive trigger that is attached to your foot or leg or other locations on your body

Many Moons ago, John Cornelius created the Fism Flash, a body worn flash effect that was popular with many professional close-up and stand-up workers including our own Steve Johnson.

The Fism Flash was an enormously clever idea but was not without its limitations. It had a click-your-heels trigger and no interrupt switch to prevent you from accidentally flashing as you walked around the room. Mr. Cornelius would later develop the Fism Flash II which was fired from a mercury switch. Later, he would discontinue the Fism Flash product entirely.

Desiring to fill a hole in the retail market, the Raldon MFG. Co. researched the parts of the original Fism Flash and redesigned it from the ground up. They consulted with Steve Johnson as to its size, shape, brightness, refresh rate, comfort and even its color. With the guts, bulb, trigger and body all redesigned, Raldon released the product as Flash Burst, a body flash for the modern professional performer.

Not a Reliable Flash Report this review
Verified buyer Pro Privacy ON (login to see reviewer names) on December 10th, 2018
The Flash Burst (Super Bright) by Grand Illusions is a very nice idea which is made unreliable through its poor construction with inferior materials. A magician should not use any gimmick which only works some of the time. This is such a gimmick. There are two main weak points that I have identified: the toe switch and the secondary on/off switch.

The toe switch is a handmade item which only works when the stars align. If you buy this gimmick, this is the first thing that you will need to replace with a real toe switch. You can get a reliable toe switch at an electronics store for (also called "Sealed Touch Pad Switches") for about $25.

The secondary on/off switch is a rotary type which does not have a positive on/off feel for whether it is on or off, and it is very touchy to get into an on position. You should replace this with a higher quality switch.

If you do both of those things, maybe at an additional $30 cost to you, you might be able to make this into a reliable gimmick. I have yet to decide if I want to do so or return mine as defective.
Did this review help you? Do you want to respond to this review?

Great product Report this review
Verified buyer Pro Privacy ON (login to see reviewer names) on October 30th, 2018
This was a quality product and does exactly what it is supposed to do. The switch is not too sensitive. But make sure to become familiar with the workings of the toggle switch (both the foot pedal and the round switch near the body of the device.
I would also like to see an update with a smaller bulb.
Did this review help you? Do you want to respond to this review?
Bestsellers