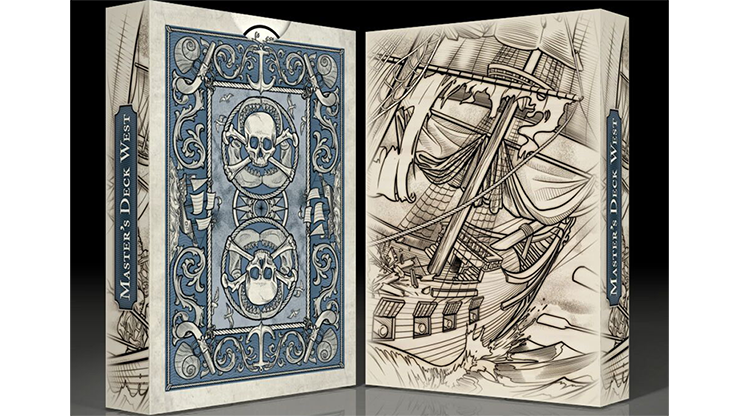 Today, when you order "Master Deck West - Playing Cards", you'll instantly be emailed a Penguin Magic gift certificate. You can spend it on anything you like at Penguin, just like cash. Just complete your order as normal, and within seconds you'll get an email with your gift certificate.

Take yourself to the High Seas, with pirates, sea monsters, and more!

Our East & West Master Decks have fifty-four unique illustrations in both the court cards and the ranked cards. Using all new illustrations from the Pirates and Sea Creatures decks, and adding them to the century-inspired art from our original Seven Seas deck, we have created the Master Decks. Every card is illustrated, and every illustration is unique. These segments include famous pirates, ships, sea creatures, monsters, and lore. Our East version has a red design on the back and tuck box. Our West version has a blue design on the back and tuck box. Ranked cards feature a more minimalist and borderless scheme, easily distinguishing them from the court cards. All four decks (Pirates, Sea Creatures, Master Deck East and Master Deck West) align to create an epic sea battle.