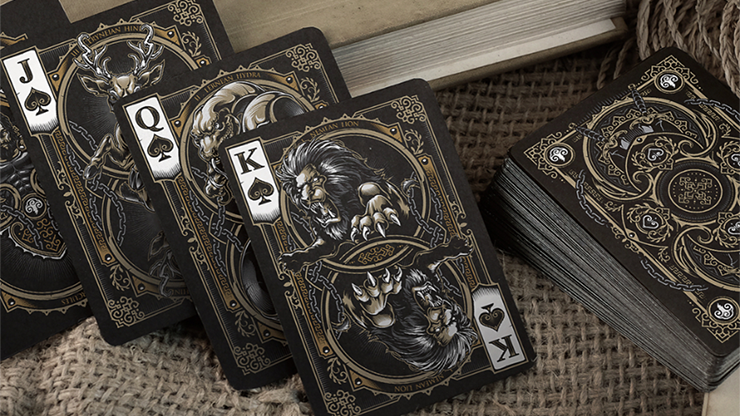 Today, when you order "Bicycle Hercules Playing Cards", you'll instantly be emailed a Penguin Magic gift certificate. You can spend it on anything you like at Penguin, just like cash. Just complete your order as normal, and within seconds you'll get an email with your gift certificate.

The adventures of the mythical hero illustrated by Blackout Brother and printed by the USPCC. Distributed by Gamblers Warehouse.

Among the mythical characters of all times, there is one who stands out for his strength and his courage: HERCULES. That's the name received in the Roman mythology for Heracles, son of Zeus, the king of the gods, and the beautiful mortal Alcmena. He is, without a doubt, the most popular of the heroes in Greek mythology.

His adventures became so famous that they spread from town to town and from culture to culture over the centuries. Now, Gambler's Warehouse pays homage to this epic demigod in a magnificent creation, full of exciting details.

This deck depicts the most adventurous essence of the hero with fully customized cards beautifully illustrated by Blackout Brother. The designs are focused in one of the most popular and exciting episodes of Hercules's life: The Twelve Labors.

Each Court card represents one of these Twelve Labors carried out by the daredevil, from killing the Nemean Lion and taking its skin off to capturing Cerberus, the guardian of the Avernus.