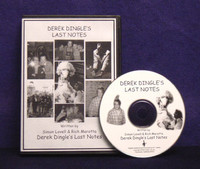 Today, when you order "Derek Dingle's Last Notes by Lovell & Morotta", you'll instantly be emailed a Penguin Magic gift certificate. You can spend it on anything you like at Penguin, just like cash. Just complete your order as normal, and within seconds you'll get an email with your gift certificate.

If you missed out on buying the original manuscript, it can be yours DIGITALLY! The 46 page book has been converted into a PDF file which can be viewed on your personal computer. (Mac & PC)

Every magician loved to see Derek perform. They loved to see effects from "Dingle's Deception's" and "The Complete Works of Derek Dingle." But when Derek worked for real people (non magicians) he did 5 classic effects. He did them better than anyone else. Here, for the first time, is Derek's Walk Around Close Up Act. Every effect was routined to be instantly repeatable. No reset. This is what makes the act perfect for walk around magic, no stealthy trips to the bathroom are necessory. Everything is included: Sleights, routine and complete patter.

Derek's Material at its best Report this review
Verified buyer Pro Privacy ON (login to see reviewer names) on August 28th, 2008
If you thought Derek's other material was good-think again! These effects are entertaining and have flawless mechanics. Definitely worth ! Buy it!
Did this review help you? Do you want to respond to this review?
Bestsellers