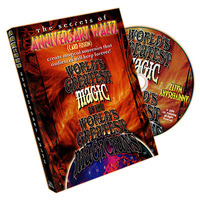 Today, when you order "Anniversary Waltz (World's Greatest Magic)", you'll instantly be emailed a Penguin Magic gift certificate. You can spend it on anything you like at Penguin, just like cash. Just complete your order as normal, and within seconds you'll get an email with your gift certificate.

Michael Ammar once wrote that one of the principles key to making a magic effect memorable to an audience is to alter an object magically and then give it away in its altered state. A souvenir of this kind will be treasured forever and there's been perhaps no better example of this kind of effect than one in which two playing cards, signed by the spectators, are magically fused into a single card. Not glued or fasted in any way; they actually become one single card.

Doc Eason took a concept by magician Christopher Carter and created a neo-classic of card magic that is in use by close-up magicians the world over and you'll see a real-world performance and a meticulous explanation of the workings by Doc himself. J. J. Sanvert is next with a version where the cards first apparently fuse face to face and then, finally, back to back and given away as a strange souvenir. Carl Andrews presents a version, perfect for strolling performers, where two cards - one signed on the front, the other on the back - fuse together. Garrett Thomas presents his version of the Eason concept with some beautiful touches that make this a truly magical experience for the participants while Etienne Pradier closes with a light and comedic routine that still packs a magical wallop and once again, leaves the spectators with an inscrutable souvenir.

Any magic trick that can leave an indelible mark in the minds of an audience deserves consideration by any magician that performs for people in the real-world and one would be hard-pressed to find a piece of close-up magic that does the job quite as well as the performance pieces you'll discover on this DVD.

Hackneyed Lines Report this review
Pro Privacy ON (login to see reviewer names) on April 2nd, 2010
"That's How I got it!!!!!!!!!" Really . . . all of you just had to use that stupid joke. I'm gonna barf. Now that that's done, if the card fusion plot intrigues you at all, then this is worth your while, especially at the asking price. However, let me point out a few things.

First, the crediting isn't very thorough. Each magician seems to give credit to a different source for being the creator of the plot. Some of the versions require a very involved set up, and most of the performers don't explain some of the moves that they are using. Granted the moves they "skip over" are pretty common ones, Riffle Force, Cross-cut Force and a few others. Some of the versions were frankly pretty lame in their performance and had no patter. I think, presentationally (I know that's not a word) speaking, Doc Eason's was the best. However Garrett Thomas's handling had a couple of really nice "convincer" moves. I also especially like Jean-Jacques Sanvert's version. It's a bit of a setup, but the cards can easily be palmed in. Also, the handling is a bit tricky, but there are some beautiful magic moments.

I think my least favorite is Carl Andrews's version. There is a huge descrepancy in the handling that is too obvious to overlook. On the other hand, however, he did get a strong reaction from his audience and his version does not require any special cards.

Etienne Pradier's version was tough to see and was over way too fast. The performance was very unfocused and scatter-brained. Also, he leaned way over the table placing his body right over the food on the table. I didn't really find his version all that compelling. Overall, however, the DVD is good quality and there are some great ideas and even utility moves that you'll learn. It's a gem folks.
2 of 2 magicians found this helpful.
Did this review help you? 1 comment

gets as big a reaction as you could possibly hope....

can make the women weep...what more could you ask???

should be in everybody's repertoire
Did this review help you? Do you want to respond to this review?

This Is What Magic Is All About Report this review
Verified buyer Pro Privacy ON (login to see reviewer names) on August 2nd, 2012
I read other reviews before writing my own and I agree to a point with what others have said about some of the variations of this effect.
As far as the crediting goes, I felt that they were explained properly.
Over the years magicians come up with their own methods and I felt that the creators of certain moves were nicely acknowleged.
As far as the actual performances go, Doc Eason by far had the best performance and handling and I felt the others were lacking in their performance.
But hey, you are buying the method not their performance.
After learning the method and handling I have come up with several ideas of my own of how to beautifully present this trick.
To me, this video gives great explanations of the handling and while some are more tedious then others the end result for the spectators is fantastic and that's what it's all about.... sharing your craft with others to enjoy.
I didnt buy this DVD to use anyone's storyline... I bought this DVD to learn the trick and make it my own and to me this is a powerful peice of magic.
Did this review help you? Do you want to respond to this review?

Good introduction to the trick. Report this review
Pro Privacy ON (login to see reviewer names) on April 7th, 2010
Anniversary Waltz can potentially be an amazing effect, the tricks on here are good but none of them really exploit the effect for all it can be. I've seen some much better versions of this effect which market at the same price as this DVD. If you want some ideas about the routine then this is a good place to start but I would suggest you look for or develop stronger routines than the ones on here.
0 of 1 magicians found this helpful.
Did this review help you? Do you want to respond to this review?
Bestsellers