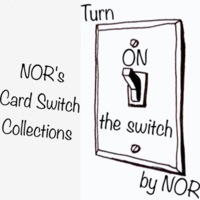 Today, when you order "Turn On the Switch by NOR", you'll instantly be emailed a Penguin Magic gift certificate. You can spend it on anything you like at Penguin, just like cash. Just complete your order as normal, and within seconds you'll get an email with your gift certificate.

・Throw Switch
Switch is completed with the action of throwing away the card to pass it spectators.

・Endless Switch
Good technique for Ambitious Card.
Switch is completed by turning the top card over.
NO DOUBLE CARDS.

・Divide Switch
The switch I use the most.This is the very slow switch that divides into 3-4 movements while communicating with spectators.
In the demo video, it's suspicious because it's done in succession, but in reality each movement is a minimum movement, and mixed in with a meaningful movement of routine (ex. Pick up spectators marker after sign).
I also explain variations that can be done in a 360-degree surrounded, and a version with few steps.

・No Motion Switch Extra
One of the most deceptive card switch. There is no suspicious movement. Fooled several pros and tech mania.
It's relatively easy and can be performed in the real world.
I'll also explain a short trick "Vanishing Point" that applies this.

*Explained only with video and English subtitles.