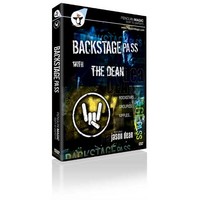 Today, when you order "Backstage Pass with The Dean", you'll instantly be emailed a Penguin Magic gift certificate. You can spend it on anything you like at Penguin, just like cash. Just complete your order as normal, and within seconds you'll get an email with your gift certificate.

Backstage Pass with The Dean

Go backstage with Jason Dean as he entertains the hard rock superstars of Godsmack after a sold-out show in Las Vegas! Not sold in stores! Exclusive to PenguinMagic.com

Jason Dean has what some have called "the best gig in magic." And up til now he's kept it pretty quiet.

"The Dean" gets called in when the entertainers need some entertainment. His specialty is working backstage at rock concerts to entertain the groupies, friends, and families of rockstars in the green room and the AFTER SHOW parties.

Jason has worked with a number of top bands including Godsmack and Metallica, and he's seen things backstage that make MTV's Spring Break look tame.

Jason's material is the stuff FREAKOUTS are made of. His delivery is deadly, slow, and accurate. He paces himself like he's playing a drum solo. He holds the beat no matter what he's layering on top. The magic builds, but his timing remains true. And by the time he's lined up the climax, the entire place is ready to scream.

When "The Dean" is backstage, you know things are about to get turned up a notch! In this incredible DVD we follow Jason backstage as he entertains the stars of the Grammy nominated band, Godsmack, after a sold out show at the House of Blues in Las Vegas. Everything you'll see really happened. The Penguin crew was there to capture it all.

And then he shows you how some of it all works! Life is good!

You'll get in-depth explanation of:

Filmed on location at the House of Blues inside Mandalay Bay in Las Vegas. You'll follow Jason Dean as he goes into the green room to entertain the stars of Godsmack after the show!

Penguin Underground is dedicated to bringing you some of the best of the unknowns! You know who we mean! The guy you see at a late night session at a convention who just makes you go "Wow! That was cool!" It may be for a series of new sleights or new presentations or totally workable effects that you just KNOW would work for YOU! Whatever the reason, YOU know that you found something WORTH your TIME! And only a few people know about it! And YOU are ONE OF THEM!