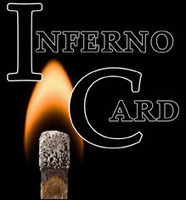 Today, when you order "Inferno Card", you'll instantly be emailed a Penguin Magic gift certificate. You can spend it on anything you like at Penguin, just like cash. Just complete your order as normal, and within seconds you'll get an email with your gift certificate.

There has never been a card revelation quite as flashy as this one!

After failing to find a selected, signed card, the magician places the deck face up on the table, and ignites the top card. In a flash of fire, the signed selection is revealed - with burn marks to prove it!

Your spectators will hold on to this keepsake for a long time after seeing your performance.

Last night I had a party gig and I had received Inferno Card the day before in the mail. Those with access to the forum will see my concerns over handling the "gimmick" - I almost didn't take it with me (roughly 24 hours after I received it) because I was unconvinced as to whether I could do this trick successfully with any of the three methods that come with it. I spent a few hours working with it and decided to take it anyway. I'm glad I did. It was a roaming gig for about 100 people and word spread faster than I could walk. I ended up performing the trick 13 times and had to turn down requests to stop repeat audiences. This trick is as good as it gets. To quote one guest: "I've seen a lot of tricks but I've never seen that. Amazing!"

You get 24 inferno cards and 2-pages of instructions.

The trick comes with a basic routine outline sans patter and then has 3 suggested "handling"s. When you buy this trick you will better understand the following point but, basically, the inferno card is more of a consumable utility than a "routine" in itself. It could easily find it's way into your ambitious card routine as a fiery conclusion rather than the standard finishes gone before. The basic routine you get is pretty much pick a card, sign a card, lose a card, find a card - a standard affair with a twist. The creativity that may come from the Inferno Card may be the most exciting part about it.

There are some problems with handling the Inferno Card however. Being what it is, without revealing anything that isn't already obvious, the inferno card is made of a different material that is in no way similar to a deck of cards. The result is something that slides all over the place, crumples, buckles and bends. By far, the easiest and most logical handling is the one that uses an overhand shuffle control - it is the one that creates the least amount of suspicion and has the highest chance of concealing any discrepancy if the Inferno Card is glimpsed by a spectator. The Charlier Cut Control and the Alternate Handling are both fine methods but not when you are dealing with the Inferno Card - I found them extremely frustrating.

The "gimmick" itself is top quality. It wouldn't pass close examination but at a few feet away, it's quite convincing. There is definitely a difference between the finish of a normal card and the Inferno Card but, to be honest, only magicians or those really familiar with Bicycle cards are going to notice that the Inferno Card doesn't have the same slightly shiny matte finish. A word of warning though - if you work outdoors and it's windy = not good. The Inferno Card, when lit, seems to have a real gift at spitting fire at any limbs nearby. I've only held the deck twice and both times I suffered for it. It might be coincidence that I got burned but the easiest way to avoid it is to not do it.

Force a spectator to select the same card design as what you receive on the Inferno Card. Don't have them sign it. Perform an ambitious card routine (such as Oz's from Born to Perform). On completion of ambitious card, switch out their real card for the Inferno Card and while they are still shocked from the previous routine, say "I've just got one more thing to show you". Light the card, watch it dissolve away and become your business card. I guarantee they'll hold on to your card.

Cheers!
3 of 3 magicians found this helpful.
Did this review help you? Do you want to respond to this review?
Bestsellers