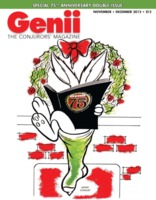 Today, when you order "Genii Magazine: November/December 2012 DOUBLE ISSUE", you'll instantly be emailed a Penguin Magic gift certificate. You can spend it on anything you like at Penguin, just like cash. Just complete your order as normal, and within seconds you'll get an email with your gift certificate.

Genii Speaks by Richard Kaufman
On the Slant by Jon Racherbaumer
In Memoriam: Alan Shaxon by Matthew Field

A selection of Magic from Genii’s first 75 Years:

A Novelty Spelling Mystery By Larsen and Wright (April 1940)

The Eight in the Side Pocket by Dai Vernon (March 1941)

The Trick of the Vanishing Aces … by Ponsin (November 1941)

The L.W. Mysteries for Children: Little Jimmie and the Christmas Stocking
by William Larsen and T. Page Wright (December 1945)

A Coin and Silk Routine by Howard Warringer (December 1945)

The Colored Sands by Milton Page Larsen (May 1945)

The Ambitious Card in Reverse by Jerry Andrus (January 1962)

A Trick with No Title by David Alexander (December 1966)

Tokkuri and Rope by Yasunaga (aka Tenkai) Matsuura (September 1969)

A Novel Card Discovery by Mathew Corin (May 1972)

Quarterly Report by Phil Goldstein (May 1979)

The Anti-Faro by Christian Engblom (May 2001)

Love it! Report this review
Pro Privacy ON (login to see reviewer names) on December 3rd, 2012
This Genii issue is amazing! I just love seeing all the old magic inventions. There are several amusing and entertaining letters. I really enjoyed reading a letter from Richard Himber to Gen UF Grant describing his see through pierced balloon prop. Many of these old magic inventions are not made anymore because they aren't cost effective. Genii did a good job of selecting items that would appeal to a large cross section of people. For example, it is hard to find any literature on small illusions. There are several in this issue. A few of these I plan on making, just because they are great effects, and would make a fun project for very little cost.
I highly recommend it.
3 of 3 magicians found this helpful.
Did this review help you? Do you want to respond to this review?
Bestsellers