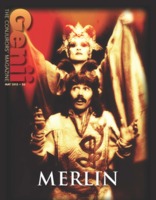 Today, when you order "Genii Magazine: May 2013 ISSUE", you'll instantly be emailed a Penguin Magic gift certificate. You can spend it on anything you like at Penguin, just like cash. Just complete your order as normal, and within seconds you'll get an email with your gift certificate.

The oldest and most respected magic magazine on the planet. This month features the story behind The Magical Musical: MERLIN. ORDER TODAY.

Books Reviewed by David Britland
Allow Me To Give You Some Really Awful Advice! by Jim Steinmeyer
Will Goldston The Man and the Legend by Fergus Roy
Milbourne Christopher: The Man and His Magic by William V. Rauscher
Frankly Disillusioned by Dean Metcalfe
The Triskadequadra Principle by John Hostler
Tricks Reviewed by David Oliver
A Taste Of Chaos by Loki Kross
Modern Triumph by Michael “Six” Muldoon
Anima—A Breath Of Life by Michel (Vernet)
Ice Pack by The Miracle Factory
Mona Lisa Van Gogh by The Miracle Factory
Videos Reviewed by Dustin Stinett
Penguin Magic Live Lecture Series by Various Artists
Rematch by Caleb Wiles
Carney 2013: Exclusive Secrets (“Vanishing Bird Cage” and “Fixing Fundamentals”) by John Carney
Project by Shiro Ishida
The Multiple Revelation Project by Andi Gladwin and Rob James
The Quest for Mastery: The Classic Magic of Michael Vincent Vol.IV by Michael Vincent
21 by Shin Lim, Jose Morales, and Donald Carlson

ANOTHER FREE PROMO?! WOW... NICE!!!!! XD Report this review
Verified buyer Pro Privacy ON (login to see reviewer names) on February 14th, 2014
If you haven't already noticed from my previous reviews on Genii Magazines, then I'll say it again!!! This free promo (like all the others I have) are just amazing!! I really do enjoy reading these and it's fantastic how Penguinmagic has decided to include these free when you spend over a certain amount of cash! It's little subtleties like this that show the customer just how much a business appreciates them! Like all other Genii Magazines, this is well worth its price (or in my case, well worth being a free promo XD) as it contains informative advertisements (so you don't have to blindly look for what to add to your arsenal of tricks), a few card trick tutorials, some magic trick reviews, some of the best magic tricks as well as the opinions and perspectives of other magicians! In short, this is well worth your consideration even after the month of May 2013 (even though I have received 2 copies of this for 2 separate orders during the month of May of 2013).
Did this review help you? Do you want to respond to this review?

Goldfinger 2 Report this review
Verified buyer Pro Privacy ON (login to see reviewer names) on June 5th, 2013
I've been forever uttering Get Genii Magazine because of its nice features and articles, but this one contains an effect named Goldfinger 2, it's outstanding and straightforward as well. Get it!
Did this review help you? Do you want to respond to this review?
Bestsellers