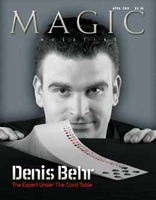 Today, when you order "MAGIC Magazine: April 2013 ISSUE", you'll instantly be emailed a Penguin Magic gift certificate. You can spend it on anything you like at Penguin, just like cash. Just complete your order as normal, and within seconds you'll get an email with your gift certificate.

COVER: Denis Behr: In Person, In Performance, In Practice By Pit Hartling and Thomas Fraps

German magician Denis Behr became the go-to guy for demonstrating difficult card sleights online. He also created the "Behr Files," an Internet resource cataloging hundreds of magic books. Here, two of his fellow countrymen have undertaken the task of describing Behr's current life and work — plus Behr provides a trick of his own.

The American Museum of Magic at Thirty-five By Gabe Fajuri

The small town of Marshall, Michigan holds one of the world's great repositories of magic history — a collection originally built by Bob Lund, and now a museum taking some new directions with easier access and outreach to the general public.

When Bob Lund spoke to the Magic Collectors' Association in 1991, he was not always complimentary about the avocation of collecting, but reaffirmed his love of magic and the people who were equally enthusiastic about the art.

Looking for advice on showing a future wizard as a common carnival magician, the producers of Oz The Great and Powerful — the new Wizard of Oz prequel — turned to a modern wizard in the classical mode: Lance Burrton. Here, Lance tells the behind-the-scenes tales of his experiences on the film.

In recent years, pop culture has produced "flash mobs," seemingly random groups of people coming together in public for a surprise, unified event, then dispersing. Now consider the "cash mob," in which friends gather to support and encourage a local business — such as a magic shop.

We begin with an offbeat method to vanish a pack of cards by Michael Boden, and then explore clever card creations from Kyle MacNeill, J.K. Hartman, and Andrew Hillcoat. Finally, Philip Bynorth delivers a solid Expertalk piece on a useful false cutting sequence.

Dr. Arthur Lintgen from Philadelphia can identify a vinyl LP just by studying the pattern of the grooves on the record. This remarkable and perfectly genuine talent provides the inspiration for this month's routine, except the effect is brought a little more up to date with the use of CDs. Three spectators freely choose CDs from a wide selection spanning many different artists and genres. You identify the chosen albums, including the specific artist and title, without seeing them. Or touching them. Or going anywhere near them. A simple secret, but an enduring mystery.

Bent on Deception By Mike Bent
It's All Geek to Me, or The Not-So-Daring, Incredibly Stupid Spring Trap

My one and only attempt at sideshow magic is the Daring Spring Trap. I ordered one, but when it arrived I was scared to death of the thing — it wasn't a magic prop, it was a real animal trap! I read the brief instructions, and while my mind completely understood the physics of it, my inner fraidy-cat couldn't be persuaded to actually try it out. When I eventually did give it a try, I did so wearing an oven mitt. I knew it had to be in the show, but the question was: How do I make it funny? The answer was obvious. I had just spent 45 minutes acting like a big baby stupid idiot. So that's what I decided to do onstage.

In thinking about these articles concerning the first fifty years of the Magic Castle, I have tried to come up with some stories that haven't been covered in our books and other articles. Since this is the April issue, and the 45th Academy of Magical Arts Awards take place at this time of the year, I thought I'd cover a bit of the background of the award concept.

For as long as I can remember, I have been a stutterer, cursed with the inability to speak without embarrassing myself. Even saying my own name takes too many staccato syllables, each machine-gun utterance adding to my shame. I am fourteen. I can feel the sweat welling up in my sideburns, starting to trickle down my reddening face. Lucille is introducing me. She smiles and gestures in my direction, inviting me onstage as she exits. I walk to center stage, gripping a red cloth bag. Much as I'd like to, it's too late to turn back now.

For What It's Worth By Mark Kornhauser
The Sex Issue

When a young boy starts to do magic and gains the admiration of his peers, he doesn't just go home and learn new magic tricks. He adopts a new identity. As soon as you learn to do the Ball & Vase trick, you consider yourself a magician. It's pretty easy for a young boy to feel a part of the fraternal ranks of the magic world. I'm sure it's more difficult for young girls to feel part of that same gang. Therein ends my understanding of young girls, and women in general.

Paynefully Obvious By Payne
It's Not Bizarre To Me

When one hears the term "bizarre magic," it brings to mind the image of a candlelit, incense-infused room where Andruzzian robed mages circle around a black-velvet draped card table, gutturally mumbling Cthulhuic incantations in a histrionic attempt to summon forth the Old Ones so they can reveal that the selected card was, in fact, the Five of Spades. This is a pity, because bizarre magic is so much more than that.

In most cases, the creative process is described as less of a quantum leap, and more of a gradual series of small but significant refinements. One method that can help produce new improvements on old ideas is the checklist. We might be accustomed to thinking of checklists as mundane reminders of tasks to do or items to obtain, but a well-written checklist can be a powerful catalyst for creative thinking. Perhaps the most well-known example of this is Alex Osborn's list of 73 Idea-Spurring Questions. This month's creative game is based on a simplified version of Osborn's checklist, a version known as SCAMPER.
Questions about this product