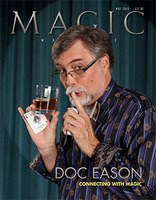 Today, when you order "MAGIC Magazine: May 2013 ISSUE", you'll instantly be emailed a Penguin Magic gift certificate. You can spend it on anything you like at Penguin, just like cash. Just complete your order as normal, and within seconds you'll get an email with your gift certificate.

It's not about the magic. It's not about the drinks. It's all about the people, the relationships, and the memories for Doc Eason — experiences and insights he's gained in more than a quarter century at the legendary Tower magic bar, and beyond.

Ricky Jay and René Lavand are masters of magic from North and South America, respectively. The lives of each have now been captured by filmmakers in documentaries that explore their craft, but leave audiences even more in awe of their work.

A Garden of Art: The Magic of Markus Zink By Wittus Witt

German magician Markus Zink is an original. A student of magic, art, and the art of magic, his unusual contraptions and surreal presentations make his theatrical shows truly unique.

The Many Editions of Harry Houdini By Bill Winters

Arthur Moses not only collects Houdiniana, he specializes in Houdini in print — every edition of Houdini literature in print. Plus, Moses shares the story of the complete known Houdini voice recordings, along with a transcript.

We begin with an offbeat method to vanish a pack of cards by Michael Boden, and then explore clever card creations from Kyle MacNeill, J.K. Hartman, and Andrew Hillcoat. Finally, Philip Bynorth delivers a solid Expertalk piece on a useful false cutting sequence.

This is a strange, visual, nearly surrealistic effect. One card is freely chosen and returned to the deck, which is shuffled and then placed on top of a tennis racket. Just by slightly shaking the racket, the cards start to melt through the strings. All of the cards penetrate except for one, and that's the chosen card.

Bent on Deception By Mike Bent
Sack to the Future, or How an Ugly Prop Redefined the 20th Century

Some magicians might think that the 20th Century Silks should have been left in the 20th century, but to me it's still a great trick. It just needs a facelift. Invented and originally sold by Frank Ducrot in early 1900 — hence the name — it is seldom used in adult shows anymore. Unfortunately, its bastard progeny, the Baffling Bra and 20th Century Shorts, are still thriving in that medium. But the original has become a staple of shows for kids and families. Why? It's a great "bare bones" trick, a nifty skeleton just waiting to be dressed up with a good story. And that's this month's offering (cue trumpets) — The Royal Magic Trick.

Over the fifty years of the Magic Castle, many films, TV shows, and commercials have used the Castle space as a location. NBC's top art director, John Shrum, designed the Castle from its inception. The Magic Castle was not just a building to John. To him, it was his "standing set." In movie parlance, that's a permanent building on the soundstage or back lot. Every nook and cranny of the Castle was designed with an eye to the camera.

When the Shakespearean actor Edmund Kean was sick and dying, he famously said to his friends who were taking pity on him, "Dying is easy; comedy is hard." That might be a pretty funny thing to say to your cronies when you are on your deathbed, but there are some real disadvantages to dying. With comedy, you can have a bad set and still go out for breakfast afterwards. But there's no breakfast for the dead.

Paynefully Obvious By Payne
Knock it Off

Intellectual property is a subject that's been bandied about quite a bit these days in the magic community, especially online. Scarcely a day goes by that there isn't a post to be found condemning a blatant, yet very reasonably priced rip-off of a trick, or a lengthy discussion about someone selling knockoffs of a recently released DVD, complete with the link so everyone can go see the offending site for themselves. And woe be it to the fledgling illusionist who unwittingly uploads a video of himself performing with a prop that wasn't made by one of its authorized builders. The ensuing firestorm of outrage and indignation just might set his magic career back by several years, if not end it altogether.

Ideas and inspiration are a bit like bristles from a street sweeper. They can be found all over the place, but first we have to open our awareness and really perceive what's around us. The search for useful information — information that might lead to a new idea — begins with having a keen awareness of our environment.
Questions about this product