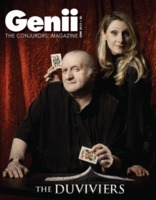 Today, when you order "Genii Magazine: June 2013 ISSUE", you'll instantly be emailed a Penguin Magic gift certificate. You can spend it on anything you like at Penguin, just like cash. Just complete your order as normal, and within seconds you'll get an email with your gift certificate.

The oldest and most respected magic magazine on the planet. This month features The Duviviers. ORDER TODAY.

Genii Speaks by Richard Kaufman
On the Slant by Jon Racherbaumer
Now Performing 16 The Genii Session On the Daley Notebooks by Roberto Giobbi
The Chamber of Secrets Okito's Black and White Duck Heads by John Gaughan
DaOrtiz a la Carte! Fishing by Dani DaOrtiz
The Expert at the Kids' Table How Do Children From Different Cultures React To The Same Trick? by David Kaye

many tricks! Report this review
Verified buyer Pro Privacy ON (login to see reviewer names) on August 9th, 2013
This edition contains many incredible tricks, all of them very well taught by The Duviviers.
Did this review help you? Do you want to respond to this review?
Bestsellers