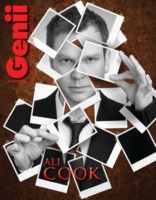 Today, when you order "Genii Magazine: August 2013 ISSUE", you'll instantly be emailed a Penguin Magic gift certificate. You can spend it on anything you like at Penguin, just like cash. Just complete your order as normal, and within seconds you'll get an email with your gift certificate.

Ali-Kazam! by Brian Sibley
Beyond Brookledge by Dustin Stinett
Pulling Back the Curtain: An American Magician Visits North Korea by Dale Salwak

Genii Speaks by Richard Kaufman
On the Slant by Jon Racherbaumer
Now Performing
Cardopolis The Probem with Premonition by David Britland
The Genii Session Red and Black by Roberto Giobbi
The Chamber of Secrets Number Divination Box by John Gaughan
The Expert at the Kids’ Table Did You Set the VCR? by David Kaye
Intellectual Property Laws and Magic Right of Publicity and a Grab Bag of Other Laws by Sara Crasson
Conjuring Dances with Equivoques by Jim Steinmeyer
Magicana
Warpcarder by Bob Farmer, Described by Ian Kendall
Cornered Coins 2 by Doug Conn, Described by Andi Gladwin
Tokyo Workshop Cutting-To-Aces Goes Undercover by Hiro Sakai, Described by Jon Racherbaumer

so interesting! Report this review
Verified buyer Pro Privacy ON (login to see reviewer names) on October 4th, 2013
in this edition you'll find a couple of tricks that will blow people away!
Did this review help you? Do you want to respond to this review?

Genii Video is Pretty Cool Report this review
Verified buyer Pro Privacy ON (login to see reviewer names) on September 18th, 2013
I haven't bought a Genii magazine in years. I got this free, compliments from Penguin. First time I've seen this video format, pretty sweet because now you can see the tricks shown and explained.
Did this review help you? Do you want to respond to this review?
Bestsellers