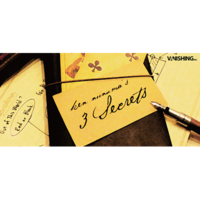 Today, when you order "3 Secrets by Ken Niinuma", you'll instantly be emailed a Penguin Magic gift certificate. You can spend it on anything you like at Penguin, just like cash. Just complete your order as normal, and within seconds you'll get an email with your gift certificate.

Ken Niinuma is not a household name in the west, but he has quietly amassed a very, very impressive arsenal of original, easy card magic. Joshua Jay "discovered" Ken on a trip to Japan nearly a decade ago. We have worked for months to bring you such an unusual and, frankly, exciting collection. This is NOT the kind of material you will find in magic shops or online stores. This is a rare glimpse into what close-up magic looks like very far from where most of us reside.

So what does Ken Niinuma's magic look like? Think John Bannon, Allan Ackerman, and Caleb Wiles...with a distinctly Asian flair. Here are details on three routines found in the collection:

Waltz: a beautiful effect for couples where under impossible conditions two signed selections find each other.

Thunderstruck: The Bannon Triumph, Japanese style. In this blockbuster Triumph extravaganza, you find all the cards of a particular suit, and then find ALL the other suits in an unexpected, surprising ending.

Crackdown: This is that rare sandwich effect worth learning (we're cynical about most sandwich tricks, but this is GOOD). Two selections are inserted fairly into the deck and the Kings then placed face up in the middle. With no moves whatsoever you immediately spread the deck to show that the Kings have moved throughout the deck to sandwich the selections.

The name Three Secrets is a hint - a big hint, actually. There really are three secrets hidden within this DVD. There is much more than meets the eye, so happy hunting, easter-egg fans!