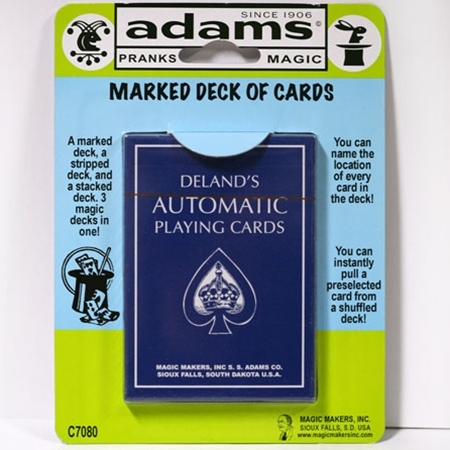 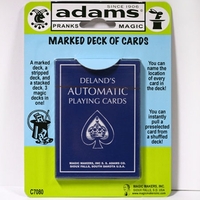 Today, when you order "Deland's Marked Deck- SS ADAMS", you'll instantly be emailed a Penguin Magic gift certificate. You can spend it on anything you like at Penguin, just like cash. Just complete your order as normal, and within seconds you'll get an email with your gift certificate.

Everybody wants to be a triple threat. Good news, SS Adams has the magic card deck that is just that. This deck is marked, stripped and stacked. Instantly pull pre-selected cards from a shuffled deck and be able to name the location of any card at any time. We don’t like to brag, but you might with the countless card tricks you play with this deck. Then again, it’s not bragging if you can back it up.

A do-everything deck Report this review
Pro Privacy ON (login to see reviewer names) on February 6th, 2018
These cards have been around for decades, and there's a good reason: they're wonderful.

First, though, I'm going to begin with the drawbacks. The most obvious is that these are not Bicycle cards. Since Bicycle cards are so prevalent, using any other kind of card in an effect can call attention to the cards. And the United States Playing Card Company has been great about producing all sorts of gaffe decks: stripped decks, blank decks, gimmicked cards, and so forth. There really isn't much need to go elsewhere.

That said, I still love this deck. It has two features that make it worth owning. First, it's stripped. Second, it's marked. So even if spectators are curious about the fact that you're using a non-Bicycle deck, the sheer number of effects that are possible to even those with minimal skill at sleights means that the deck can be utilized throughout a routine featuring multiple effects that use only the stripping, only the markings, or nothing at all.

I have been using these cards for decades and have freely handed them out for spectators to shuffle, cut, or choose cards from. In that time, I have never had anyone note that the deck is stripped or marked. Not once.

I should also note that the deck can be stacked and that the markings work with a stacked deck.

As for the markings themselves, they require a little bit of attention, meaning that the magician must be a little bit careful about how to read them. While there are certainly virtues to a deck that can be read from several feet away, it is easy enough to adapt or select routines that allow that extra second to read the card.
Did this review help you? Do you want to respond to this review?
Bestsellers