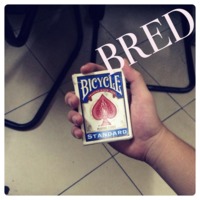 Today, when you order "Bred by QUANG CD", you'll instantly be emailed a Penguin Magic gift certificate. You can spend it on anything you like at Penguin, just like cash. Just complete your order as normal, and within seconds you'll get an email with your gift certificate.

I simply ask the spectator to choose 1 random card then put it in the middle of the deck .the deck will be mixed up and divided into 2 parts and both of them will be shuffled one more time After that i ask the spectator to think what pack have his card in it. For example in the performance, the spectator chose the right pack, then i asked the color of their card , they said " red " and every single card from the chosen pack were red but it did not include the spectator's card. In the end , i showed them that the other pack was full of black cards with an exception of one red card which was the selected one

Misleading Report this review
Verified buyer Pro Privacy ON (login to see reviewer names) on November 2nd, 2014
Not a free choice. Card cannot be returned anywhere in the pack.
Did this review help you? Do you want to respond to this review?
Bestsellers