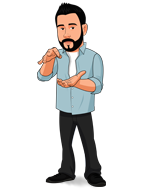 Today, when you order "Brushing Roulette by Matt Mello", you'll instantly be emailed a Penguin Magic gift certificate. You can spend it on anything you like at Penguin, just like cash. Just complete your order as normal, and within seconds you'll get an email with your gift certificate.

Asking only a couple of questions, the performer grabs one of the toothbrushes--yellow--and starts vigorously brushing his teeth with it. The spectator confirms that he didn't use that one. Another question later, and the green toothbrush goes into the performer's mouth. Down to the last two, the performer asks that the person not make a face or give anything away, even if their toothbrush is about to become a lollipop! A few seconds later, the performer has his eyes closed and a brush in each hand--red and blue. After a silent moment, he commits to his decision and finally puts the blue one in his mouth, swishing it around. The spectator confirms that he had used the red toothbrush, and it is given to the spectator as a souvenir of the experience.

Perfect for stage, but can also be used close-up. It's also much better suited for a children's show than a classic smash and stab routine.

This is very clever Report this review
Verified buyer Pro Privacy ON (login to see reviewer names) on August 29th, 2017
The method is nothing new, but.....the theatrical concept is solid gold.

The only real problem - which exists for MANY mentalism effects - is that you have a 25% chance of being correct no matter what.

But - with that said - the fun you could have with this idea is very, very good.

And, if you mix it in with a couple of other tricks, etc. I think the 25% issue fades away.
Did this review help you? Do you want to respond to this review?
Bestsellers