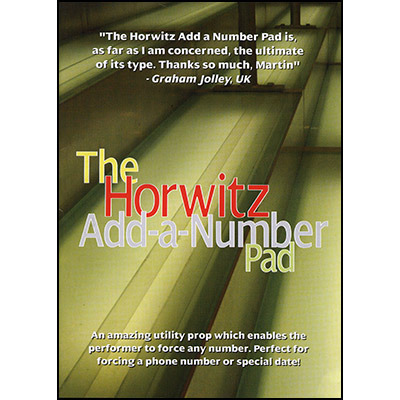 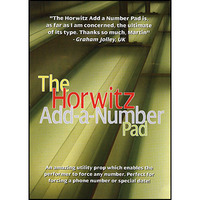 Today, when you order "Add-A-Number-Pad by Basil Horwitz", you'll instantly be emailed a Penguin Magic gift certificate. You can spend it on anything you like at Penguin, just like cash. Just complete your order as normal, and within seconds you'll get an email with your gift certificate.

An amazing utility prop which enables the performer to force any number. Perfect for forcing a phone number or special date.

This new add-a-number pad is based on the principle of the Basil Horwitz Wallet and locks firmly using rare earth magnets. The instructions supplied include details of four stunning routines that you can perform with the Howitz Add-a-Number pad including a brilliant effect where a members of the audience are asked to write numbers on the pad and when written a fourth spectator is given the wallet and asked to add up all the numbers. The total arrived at, which could be 051206, is written up on a large white pad and shown to the audience who are asked to call out today's date. It just so happens to be the 5th of December 2006 and that is just what the sum total indicates 051206 (of course you modify the total for each performance so that it reflects the date of the actual performance.

Another great routine starts when you hand a member of the audience a sealed paper bag with a big question mark on it. Once again the pad is passed around and the final spectator adds up the sum and calls out the total which the magician writes on a large sheet of white paper. The performer asks for someone in the audience with a mobile phone to phone the actual number now written on the large sheet of paper. He or she phones the number and a mobile phone can be heard ringing in the audience. It is the mobile phone which was in the sealed paper bag and when answered the two spectator find that they are speaking to each other.

Full performing details of these effects plus others are provided in the comprehensive instructions supplied. The Horwitz Add-a-Number Pad can be used without the physical intervention of the performer. The pad is passed from one spectator to the next and each is asked to write numbers in sum-form, and until the wallet is actually closed nothing happens. Once the wallet is closed the real numbers and the sum are exchanged for the fake sum which will add up to the number to be forced by the magician. The last but one spectator is asked to CLOSE the pad and then to throw it on to someone else in the audience. The very act of closing the wallet causes the magnets to lock and the next time the wallet is opened the sum facing the spectator is the forced sum and the real sum is tightly locked away. Credit for the creation of this brilliant pad should go to Tony Curtis in Thailand who makes the Horwitz Wallet for me and it is Tony who came up with the idea of using the same principle for the Horwitz Add-A-Number Pad. Thank you, Tony.

What Others Have said:

"I have been using a variety of add-a-number pads over the years and I have to tell you Martin that absolutely none of them can compare with the Basil Horwitz Add-a-Number Pad that you have produced. It is an absolute joy to use for many reasons and as far as I am concerned it is the ultimate of its type. It is beautifully made in leather, it is very discreet, natural looking and completely innocent in appearance. What I also love about it is the ease of preparation which can be achieved in literally ten seconds. Magicians who have already purchased this particular item and have used it will already know that you can hand it out and not have to worry about having to retrieve it yourself. It would require a very incompetent mentalist to come unstuck with this amazing prop. Thanks so much Martin."
- Graham Jolley, UK

"I thought I would drop you an email to let you know how much I love the THE BASIL HORWITZ ADD-A-NUMBER PAD. It is a dream to use, I perform a comedy mind control stage act in the comedy clubs in the UK...I recently did the routine and had the spectator come up on stage and call my mum who had the prediction. The reaction was amazing. It is so nice to be able to hand the pad out without any fear. The quality is amazing."
- Ashley Turner, UK

"A huge thank you for the pad, now gratefully received. Well, I do love it. It's beautifully made as I would expect from you and Tony Curtis. In fact, it's a really elegant prop, without, of course, looking like it's a prop. I've never really got on with the old pencil-on-a-string method, (found them not as reliable as I'd hoped and the necessary move a little big, but maybe that's just me), but this pad eliminates the sellotape and string and snagging, which I think is a good thing. The reset is a doddle too."
- Daniel Lander, UK

Save Your Money Report this review
Verified buyer Pro Privacy ON (login to see reviewer names) on May 2nd, 2013
After reading the positive reviews, I was surprised to receive an overpriced, ho-hum product. The leather is very stiff and there is no easy way for a spectator to keep the pad open and write without a good chance of exposing the gaff. Also, when the pad is closed it does make an audible "whap" and the idea of having a spectator toss it to someone else after the switch is made is ludicrous. The comments about "audience management" are absurd because you want people to handle the pad casually and the performer shouldn't have to focus on controlling the process, which is what the product description promised you wouldn't have to do. I've performed magic and mentalism professionally since the late 90s and I've always used a simple spiral bound notebook to switch numbers, etc., which never fails. Why I thought the Add-A-Pad would be an improvement now eludes me. As always, buyer beware.
2 of 2 magicians found this helpful.
Did this review help you? Do you want to respond to this review?

Excellent Report this review
Verified buyer Pro Privacy ON (login to see reviewer names) on March 15th, 2012
This is a phenomenal pad! I know it is pricy, but it is a very nice leather pad that works beautifully. Sometimes it is nice to have a little device that enables you do something really fun without having to even think about the mechanics of the magic. I use it in conjunction with Andrew Mayne's Butterfly effect to create a really fun mental act with a switched bill that leaves the spectator with a nice souvenir. Check them both out!
Did this review help you? Do you want to respond to this review?

Add-A-Number-Pad by Basil Horwitz Report this review
Verified buyer Pro Privacy ON (login to see reviewer names) on November 13th, 2015
After reviewing this prom various web sites, I decided to buy this products from Penguin Magic only, because I found it cheaper there. I liked the simplicity of the mechanism on which it is based upon.You would love to use it.
0 of 1 magicians found this helpful.
Did this review help you? Do you want to respond to this review?
Bestsellers