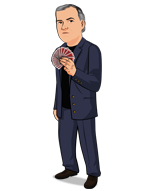 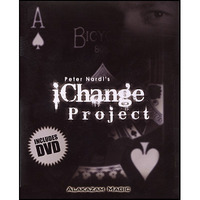 Today, when you order "Peter Nardi's iChange Project (with Gimmicks) by Alakazam - DVD", you'll instantly be emailed a Penguin Magic gift certificate. You can spend it on anything you like at Penguin, just like cash. Just complete your order as normal, and within seconds you'll get an email with your gift certificate.

(6 customer reviews)
+ Add to Cart
Review Wishlist
In stock: usually ships within 24 hours!
Order in the next 6 hours 36 minutes and it will ship TODAY!
card
close-up-
dvd
Tweet

This effect is without doubt one of the most direct and cleanest cards in pocket transposition effects ever created.

From the ingenious mind of Peter Nardi comes a routine that makes the interchange plot cleaner and simpler than any other version previously released.

Four Aces and four kings are shown and the four aces placed into four different pockets about the magicians' person. Each card really is fairly placed into the pocket and nothing is stolen back out.

The four kings are now fanned to display the faces and the backs may also be shown if you wish. Now with no sudden moves, the cards are turned face up again and spread wide to show the four aces!

Now without any false moves, the first card is removed from the first pocket to show it is now a king! Then the second, third and fourth cards are each removed to show that all four kings have changed places with each of the four aces!

The cards are now placed on your spectator's outstretched palm and she is asked to place her other hand on top. Your spectator is now asked to name kings or aces and in this case, we assume she chooses aces. She now lifts her hands apart to discover that the aces have totally vanished and just the four kings remain in her hands!

The magician now reaches back into each pocket, totally empty hands each time and one by one, removes the four aces from the four separate pockets once again!

All cards can be examined and you end totally clean!

As well as the iChange cards, specially printed by the USPCC, you also receive a detailed instructional DVD that takes you through every stage of the handling to the effect.

As well as the interchange routine, the DVD also covers additional ideas, routines and handling tips that use the iChange gimmicks including:

Please note that the gimmicks are currently ONLY available in RED backed Bicycle design. Just add your own regular deck and you are ready to perform.
Questions about this product

Pretty Good! Report this review
Verified buyer Pro Privacy ON (login to see reviewer names) on January 24th, 2014
(This review is for Peter Nardi's iChange Project (with Gimmicks) by Alakazam - DVD)
This is a good card to pocket routine. The effect does has some sleights but they are really easy. I personally don't perform any of the other routines just because for me they don't seem as powerful. The signed routine is (in my opinion) not worth it. The minus one star was for the price. This should have been a $25 dollar value.

You end clean not because of the gaffs, but because of a certain sleight that is so easy, yet so deceptive and it allows you to take the gimmicks out of play. The best part about this is that when your done and after everyone has looked at the cards, you can immediately go into any other routine with your deck. One I will use for sure and you will too. Buy it!!!

Im thinking on combing this with Pocket Bizarre where the card is signed and I do it right after Ichange.
2 of 2 magicians found this helpful.
Did this review help you? Do you want to respond to this review?

Great for Close -Up and Parlour Report this review
Pro Privacy ON (login to see reviewer names) on August 4th, 2010
(This review is for Peter Nardi's iChange Project (with Gimmicks) by Alakazam - DVD)
I'm not a fan of most of Peter Nardi's stuff. I've purchased other effects and then decided to go with my own handling. With that said I almost did not buy this one, because I have my own card to pocket routine that doesn't use gimmicks. After I bought it, I'm glad I did. By the demo it looks more like a show off peace, than a magical moment in the spectators hands. The later is my style of performing. Peter teaches a great routine where the change in fact happens in the spectators hands and this is worth the price of this effect. Peter Nardi is back on my radar :)

P.S. The gimmicks are completely unique and you end with everything examinable.
2 of 2 magicians found this helpful.
Did this review help you? Do you want to respond to this review?

Another good one from Nardi Report this review
Pro Privacy ON (login to see reviewer names) on April 5th, 2010
(This review is for Peter Nardi's iChange Project (with Gimmicks) by Alakazam - DVD)
It's amazing how infrequently Nardi disappoints. So, if you've seen the demo, you know that this is very visual and looks very clean. I can tell you that it really is as clean as it looks. There are no real sleights to have to worry about... you just need to get the proper handling down. The best part of all is that you end completely clean and examinable. Generally, with packet effects consisting of gaffed cards, you're not left in a position where you can openly display the cards when you're finished; with this effect, you can.

When you combine this clean finish, with the ease of handling, and the great reactions you'll get, this one's a no-brainer.
2 of 2 magicians found this helpful.
Did this review help you? Do you want to respond to this review?

Great, Stand-up Cards to Pocket Report this review
Verified buyer Pro Privacy ON (login to see reviewer names) on September 1st, 2016
(This review is for Peter Nardi's iChange Project (with Gimmicks) by Alakazam - DVD)
Strong, easy to do, clean at the end. I like it a lot.
1 of 2 magicians found this helpful.
Did this review help you? Do you want to respond to this review?

Very well made! Report this review
Verified buyer Pro Privacy ON (login to see reviewer names) on February 28th, 2011
(This review is for Peter Nardi's iChange Project (with Gimmicks) by Alakazam - DVD)
This is a visual, clean effect. I highly recommend it!!!! It is a bit overpriced, but you'll get a great routine!!!!
Did this review help you? Do you want to respond to this review?

AMAZING! Report this review
Verified buyer Pro Privacy ON (login to see reviewer names) on April 2nd, 2010
(This review is for Peter Nardi's iChange Project (with Gimmicks) by Alakazam - DVD)
I absolutely love this effect and after you've practiced it (almost no practice required for this amazing effect) and do this for people and they freak out all the cards are completely examinable at the end of the effect!
Did this review help you? Do you want to respond to this review?
Bestsellers