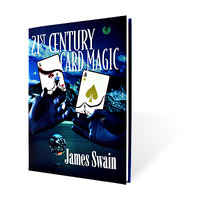 Today, when you order "21st Century Card Magic by James Swain - Book", you'll instantly be emailed a Penguin Magic gift certificate. You can spend it on anything you like at Penguin, just like cash. Just complete your order as normal, and within seconds you'll get an email with your gift certificate.

"Cards are power; learn to harness that power, and you will be forever rewarded" - From Preface by James Swain.

From Introduction by Bill Malone

"This book is a perfect way to start off the new century. I have tried many of these routines in front of real people and can attest to their greatness. This book has something for everyone, whether you are a beginner or an accomplished sleight of hand magician...There are so many routines in this book worth performing that I do not have time to mention them all...It is a well known saying, if you can find one trick in a book that you can actually use than you've gotten your money's worth. Well, with this book, you will get your money's worth over and over again."

Tricks of The Masters

Great book but challenging Report this review
Verified buyer Pro Privacy ON (login to see reviewer names) on April 27th, 2018
(This review is for 21st Century Card Magic by James Swain - Book)
Some absolutely stunning card magic explained in a very concise format with great photos. The reason 4 stars not 5 due to the advanced skills necessary to execute. For intermediate and advanced card workers but if you put the time in you'll be rewarded with some unique and special card magic.
3 of 3 magicians found this helpful.
Did this review help you? Do you want to respond to this review?

Sloppy Report this review
Verified buyer Pro Privacy ON (login to see reviewer names) on June 30th, 2020
(This review is for 21st Century Card Magic by James Swain - Book)
I was all set to love this book, and was all set to get into it; starting with the 'Weapons' section where I could learn some Two Full Deck Controls...and right when it references 'see photo 6' I hit a brick wall.

There isn't a photo 6, but thankfully the wording all but requires a photo.

I mean, I feel like one honest proofread would have caught that.

So, right off, the book left me frustrated and not in any hurry to push on and see what other egregious errors it might contain.
0 of 3 magicians found this helpful.
Did this review help you? Do you want to respond to this review?
Bestsellers