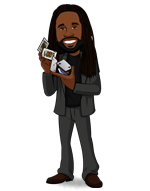 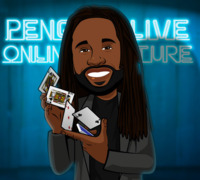 Today, when you order "Brandon Gerald (Presto) LIVE", you'll instantly be emailed a Penguin Magic gift certificate. You can spend it on anything you like at Penguin, just like cash. Just complete your order as normal, and within seconds you'll get an email with your gift certificate.

"Brandon Gerald's magical swagger is refreshing. He is definitely someone who is advancing the Art of Magic to the next level. Brandon's talent is "Simply Magical" -Ice McDonald, Master Magician

"Brandon is a Rising star in magic. It's easy to admire his effortless ability to entertain." -Nicholas Lawrence

"People love when their favorite artist gets discovered. I'm excited for people to discover one of MY favorite artists, Brandon Gerald!" -Marcus Eddie

"Not only his perfomances are fun and highly entertaining, his magic is awesome and his methods combines different principles in such a unique, practical and logical way that you will start using his material instantly! You do not want to miss this!"-Ricardo Berdini

"Brandon is a great guy! I've met him a handful of times. If you don't know who he is, you should, cause he has chops and charisma. I'm hyped for his lecture!" –Casshan Wallace

Floating and Vanishing cigarette- Inspired by Steve Fearson, this is the routine Presto regularly opens his show with. A cigarette floats around and then into his mouth before he lights and vanishes it.

Thumbs Up- A super deceptive way to perform the thumbs up gag.

Bill Switch- Presto's handling of the bill switch that doesn't utilize a thumbtip.

Multiple Selection- A modular six card multiple selection routine. The cards can be found in any order card and each revelation is strong enough to stand on its on.

Chaos and Order- A quick visual piece with a deck of cards. The deck is shuffled and cut in a convincing way, yet all the cards are shown to be in order. In this section Presto will also discuss and teach the moves he regularly utilizes in his card work.

Triumph- Presto's in the hands version of triumph. A card is selected and placed back into the deck. Half the cards are turned faced up and shuffled into the face down cards. After a series of shuffles, the cards are spread to all be facing the same direction with he exception of the selected card.

ACAAN- Three versions of any card at any number.

Three Card Trick and Behind the Back- Two card tricks without a name that will be sure to fool just about anyone including magicians.

Coin Sharpie- Inspired by Rick Merrill and Rune Klan, this is a routine utilizing a sharpie and a marker. The coin jumps around and vanishes before eventually switching places with the sharpie multiple times.

Triple Coin- Presto will teach his favorite three coin routine utilizing Johnny Wong's super triple coins. Three coins visually appear one at a time before impossible vanishing one by one.

Color Force- Presto's method of forcing a color on a cube; all done without touching the cube.

Originally from North Carolina, and having performed for several years as a featured magician at Universal Studios in Orlando, FL., Brandon now calls Columbus his home! Brandon won 2017 Rising Star of the Year from The International Association of Black Magical Artists, and regularly appears locally at P3 Magic Theater. With a mixture of impossible visual antics, and a smooth casual behavior, Brandon provides an experience that you won't forget.

He is a Theif Report this review
Verified buyer Pro Privacy ON (login to see reviewer names) on July 12th, 2018
Throughout this entire lecture Brandon stole and taught other magicians material, without their permission. From Cosmo Salono’s “The Q”, Derek DelGaudio’s Truffle Shuffle, Nathan Kranzo’s Tru Test, Steve Fearson’s Floating Cigarette, just to name a few. There are over a dozen effects taught with out permission.I can’t imagine why or how penguin would allow this.
7 of 14 magicians found this helpful.
Did this review help you? 2 comments

Love it!! Report this review
Verified buyer Pro Privacy ON (login to see reviewer names) on July 17th, 2018
"He's teaching stuff that is not his" "How can penguin let this happen". Stop being so childish pleaseee! He did what we all do...he learned something and adapted it to his style! I really enjoyed everything he taught here and i will absolutely do some of this stuff.
Good job Presto!
2 of 4 magicians found this helpful.
Did this review help you? Do you want to respond to this review?

Watch & Learn how to be a pro.. Report this review
Pro Privacy ON (login to see reviewer names) on July 12th, 2018
I loved this lecture, just observing how brandon goes about delivering the preparations you c anlearn so much! I love his style and how he utilized common ideas in magic. The three card trick is worth the price alone!!
Add to Cart!
1 of 2 magicians found this helpful.
Did this review help you? Do you want to respond to this review?

PRESTO! BUY THIS NOW!!! Report this review
Verified buyer Pro Privacy ON (login to see reviewer names) on July 9th, 2018
Hey Penguin! My name is Jackson Cooke. I met Presto at the MAXX Atlanta Penguin magic convention. He has really influenced me since. He is such a nice guy and a great magician. Now, let's talk about the lecture. This was honestly the best lecture I have ever purchased on Penguin. The levitation method he teaches is worth 30$ alone. Not to mention the bill change and one of the funniest card routines I have ever seen. BUY THIS NOW!!!!!!!!!!!
1 of 2 magicians found this helpful.
Did this review help you? Do you want to respond to this review?

Great work Brandon Report this review
Verified buyer Pro Privacy ON (login to see reviewer names) on January 23rd, 2019
I am not sure but if this was Brandon' s 1st Penguin Live. Props to ya brother. Great job
Did this review help you? Do you want to respond to this review?

My friend Brandon did an awesome job. Report this review
Verified buyer Pro Privacy ON (login to see reviewer names) on December 15th, 2018
He is care free in his style of performance and teaching. But I think that’s what makes this so good. Because that is how you have to be in real life to pull anything off. Yes, some if not all of this is not his. But it is his version and style that he is putting on the plate here. My friend Brandon did an awesome job. I’m not writing this review because he is my friend. But because this is the truth. Credit where credit it due.
Did this review help you? Do you want to respond to this review?

Get it ! Report this review
Verified buyer Pro Privacy ON (login to see reviewer names) on July 12th, 2018
Good selection of Material & presentation
At home on stage !!!
Great performer !!!
4 of 9 magicians found this helpful.
Did this review help you? Do you want to respond to this review?

Presto Chango Report this review
Pro Privacy ON (login to see reviewer names) on July 14th, 2018
Did the negative reviewers even watch this?? These ideas and routines have been Presto'd into his own style...changed and adapted to be able to share. There is nothing new under the sun and every magic effect is based on the same principles....magicians make slight changes to make it there own. there is too much ego and lack of manners from these rude reviewers who could have handled this a different way. BTW before they posted these magicians went on a smear presto campaign on SME...grow up magicians. there are polite ways to address issues privately. make your art better by having some classiness in your opinions and polite discussions instead of ripping someone apart.
3 of 7 magicians found this helpful.
Did this review help you? Do you want to respond to this review?

Presto Report this review
Verified buyer Pro Privacy ON (login to see reviewer names) on July 12th, 2018
I enjoyed Presto very much .....interesting performer !
3 of 7 magicians found this helpful.
Did this review help you? Do you want to respond to this review?

Rip off Report this review
Verified buyer Pro Privacy ON (login to see reviewer names) on July 12th, 2018
He seem's like a great guy and good performer but he is teaching stuff that is NOT his to teach. He should ask for permission from the CREATORS BEFORE he teaches stuff other's created. If they showed it to you does not mean go lecture on it. If you bought it - does not mean you can teach it. Shame on Penqiun for letting this lecture air.
5 of 14 magicians found this helpful.
Did this review help you? Do you want to respond to this review?
Bestsellers