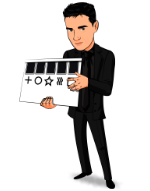 Today, when you order "Master Deck by Marc Oberon", you'll instantly be emailed a Penguin Magic gift certificate. You can spend it on anything you like at Penguin, just like cash. Just complete your order as normal, and within seconds you'll get an email with your gift certificate.

All of Marc Oberon's The Master Deck teachings collected together:

The Master Deck - Volume 1
Have the ability to locate ANY named card instantly and with no memory work!

This new system from the mind of Marc Oberon takes all of the time and effort out of learning to use a memorized stack. You'll really be using it in no time at all. Includes several tricks to get you started.

Colback
A thought-of card is revealed as the only oine in the pack with a different coloured back.

Tapping
A spectatornames any card in the pack. The magician spreads the deck, displaying the backs of all the cards, and asks the spectator to tap the back of any of the cards she sees. When that card is turned over it is found to be her named card.

Psychic Stop-Out
A spectator names any card in the pack. The magician counts the cards out onto the table and asks the spectator to say "stop" at any point. the card is turned over and shown to be the named card.

Dribble
A spectator names any card in the pack. The magician then allows the crads to trickle or dribble from one hand into the other (or onto the table). the spectator can say "stop" at any poiunt and their selected card will be the face card of the remaining cards held in the performers hand.

Hinge Change
A spectator is asked to name a thought-of card. Explaining that the King of Diamonds has the ability to take on the identity of any other card in the pack you show her the King, face-up on the bottom of the pack. Simply by waving your hand across the card it changes into the thought-of card.

Spead brainwave
A spectator names any card in the pack. The perfomer spreads the cards in his hands to show the deck as normal with the backs of the cards facing the spectator. the cards are immediately handed to the spectator who is invited to spread the deck themselves. indoing so they reveal their named card face-up in the middle of the face-down pack.

Name Deck
Using the priciples of The Master Deck, you can perform a variant of the "Phil Deck" using a spectator's name!

In this package you will receive one specially prepared Master Deck, the Master Deck Book and an instructional DVD teaching the mechanics of the deck and six fantastic routines utlising the system.

Absolutely incredible! Report this review
Verified buyer Pro Privacy ON (login to see reviewer names) on March 30th, 2016
This is what I have been looking for! I have tried mem deck work before and even with Geoff Williams' amazing method of rapid memorization, I still found it difficult to memorize the deck in a reliable, fast way and keep it memorized. So I wanted a way to find any card quickly without looking at the deck. This is it! Within five minutes of opening the trick, I was able to locate any card in the deck!

That being said it will take some practice to be able to do this quickly but it is literally as easy as riffling The deck.

Some of the methods to some of the tricks listed in the ad copy require some pretty advanced sleights to accomplish but any magician who is regularly performing with cards should have little difficulty executing the required moves. The book covers everything but the DVD is excellent in teaching exactly what is needed.

I will point out the method to the physic stop trick is not as reliable as I would have liked but the out which is presented will work nicely in case the trick goes wrong. A little audience management is needed to do it perfectly but should not be too much of a problem even if it is a miss.
I am giving this five stars simply because it takes the memorization out of a memorized stack without marking the deck like Andy Nyman's "The Code" Which is phenomenal if you do not have that deck GET IT TOO!

A "Phil" type trick is explained which led me to think about just doing a simple Any Card At Any Number effect. Think about it, what is the problem with most ACAAN tricks? Finding the friggin card! No sweat with this!

The Brainwave effect included with this is worth the cost of the trick.

Combine this with Gregory Wilson's "Cold Case" and you may just start a religion. Or at least have people start worshiping you. Highly recommended.
2 of 2 magicians found this helpful.
Did this review help you? Do you want to respond to this review?

Amazing Report this review
Verified buyer Pro Privacy ON (login to see reviewer names) on June 24th, 2017
I've never tried a memorized stack before however this is very easy and truly amazing. Marc has created a system I will use forever
Did this review help you? Do you want to respond to this review?

Brilliant Report this review
Pro Privacy ON (login to see reviewer names) on March 2nd, 2015
well explained could make your own deck easily the DVD is only about 15-20 mins and the effects are killer.
Did this review help you? Do you want to respond to this review?
Bestsellers