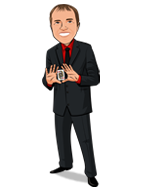 Today, when you order "Boris Wild's Sensations (2 DVD Set)", you'll instantly be emailed a Penguin Magic gift certificate. You can spend it on anything you like at Penguin, just like cash. Just complete your order as normal, and within seconds you'll get an email with your gift certificate.

You like magic when it is simple, direct, and effective? You like to be fooled by impossible effects that leave a strong impact on the audience? You like routines that make your spectators feel a magical emotion? Then Boris Wild's SENSATIONS is made for you!

"Great lecture. One of the best we've had!"
- Marvin Berglas, Vice-President of The Magic Circle

SENSATIONS will allow you to perform incredibly clean predictions and coincidences that are absolutely impossible. You will even be able to find a chosen card whilst blindfolded and to influence a spectator so he always selects the cards you want.

Discover Boris Wild's best routines from his critically-acclaimed lecture SENSATIONS on this unique 2-disc set (which features over THREE hours of material).

"Superb lecture. I enjoyed every minute!"
-Ash A

The BEST lecture I have seen in years."
-Paul B

"An amazing lecture from a brilliant magician."
- Andrew W
Questions about this product