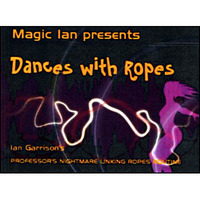 Today, when you order "Dances with Ropes (Ropes and DVD) by Ian Garrison", you'll instantly be emailed a Penguin Magic gift certificate. You can spend it on anything you like at Penguin, just like cash. Just complete your order as normal, and within seconds you'll get an email with your gift certificate.

Dances with Ropes (Ropes and DVD) by Ian Garrison

Effect: The performer shows a small medium and long rope, then instantly has three equal lengths. He converts that back to small medium and long. Then slowly stretches the ropes again. Restores it. Then makes all ropes equal lengths and shows them SEPARATELY Then he makes three rope loops and links and un-links them. Gets rid of one rope, and then converts 2 ropes back to three. Finally restoring the three equal ropes back to uneven lengths.

You get a 55 minute DVD and a set of Linking Ropes plus 4 additional routines, bonus "Patriotic Professor", and ungimmicked Linking rope/Professors nightmare routine.

"I will tell you that I was very pleased, great job! I have to place some of your workings up there with Tabary and Sanders who'm I hold in high regard. You really have some great out of the box thinking that I will put to good use. Thanks much and i look forward to future works of yours."
- John Bowlin

"I just got my advanced copy of Ian's new DVD yesterday, and I opened it immediately to see just how he did those baffling moves. There is some similarity in appearance between the Tabray routine, and Ian's routine, but there is no similarity in their technique. Ian's technique is absolutely different than any rope routine I have ever seen. He is a master of thinking outside the box, and his technique for this routine goes against the grain from beginning to end, it is as entertaining for magicians, as it is for the laymen. Even though it will take me some time to master this routine it is far easier than Fiber Optics, or the Tabray routine, with just as much impact. Ian has set the bar very high with his "Dances With Ropes", and any magician who buys it will be both performing, and talking about it for years to come."
- Al Angelo