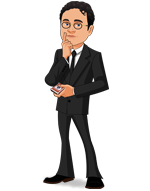 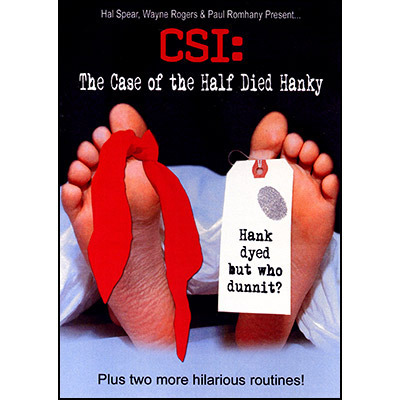 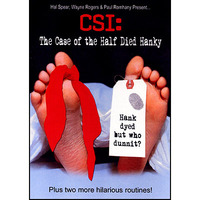 Today, when you order "CSI by Hal Spear, Wayne Rogers, and Paul Romhany", you'll instantly be emailed a Penguin Magic gift certificate. You can spend it on anything you like at Penguin, just like cash. Just complete your order as normal, and within seconds you'll get an email with your gift certificate.

Now you will be able to learn the exact routine that has been an opening routine in Paul's professional career on cruise ships, in comedy clubs, and at corporate events. This is the first time Wayne Rogers has given his permission for anybody to release his unique handling of the half-dyed hanky, which he has kept to himself for over 25 years. Those that are familiar with the standard handling will appreciate the need for NO EXTRA DYE TUBES to produce the final half-dyed hanky.

Hal Spear, a comedy and TV sitcom writer has written an incredibly clever and hilarious routine for the modern performer based around the hit TV show, CSI. This specially crafted routine takes the audience on a hilarious version of the show called "CSI: The Case of the Half-died Hanky." using black and red silks, with the final hanky being dyed half red and half black. Every joke and line is crafted by Hal Spear and written specifically for this effect. these are all original jokes with no stock lines!

Included with this routine are TWO bonus routines. One is based around gambling and "What happens in Vegas stays in Vegas." The other routine is based on the famous book "Men are from Mars, Women are from Venus."

Designed by working professionals FOR magicians who want professional and highly commercial magic - this package contains everything a performer will need to add this to your act straight away. Stand out from the magicians by having a script that is original, hip, and extremely entertaining. The perfect routine for the modern performer. It can be performed under any condition from cabaret, private parties, cruise ships, comedy clubs to corporate events.

YOU RECEIVE: An Instructional DVD explaining, Wayne Rogers unique handling that makes this so much easier to perform - no switch of dye tubes! Three professional scripts crafted by famed comedy writer Hal Spear. Special gimmick and black and red silks needed for these routines.