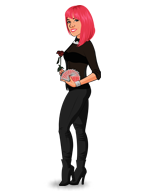 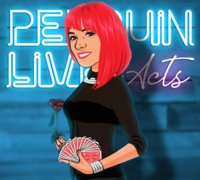 Today, when you order "Laura London LIVE ACT", you'll instantly be emailed a Penguin Magic gift certificate. You can spend it on anything you like at Penguin, just like cash. Just complete your order as normal, and within seconds you'll get an email with your gift certificate.

"When you think of card cheats, the image that first comes to mind does not look like Laura London. Until after you've seen her show, at which point her wily charms will have moved her to the front of the line!"- Max Maven

"It has always been a joy to watch Laura work, her sleight-of-hand skills and dexterous abilities are not only as natural as they could possibly be, but also gracefully wonderful to watch. She is without out a doubt, one of the finest playing-card-technicians that I have ever had the pleasure to have sat at the card table with."- Daniel Madison

"Laura London is not just a fantastic magician, she is a WORKER. The material she performs in her Cheat Act has been refined and audience tested for many years, all over the world. Laura's done the hard part. All you have to do is watch, listen and learn.”- Chad Long

Name an Ace- A fun way to produce any ace named. Great if you want to have a card quickly chosen and signed. Depending on what they choose, we talk about greek deals, crimps and shuffling controls.

An Ambitious Card- This routine is inspired by Michael Ammar. It's a series of moves including Wesley James' 'Load up'. I use this effect to create a unique presentation to describe the similarities of the card cheat and the magician.

Card Counting Demo- This routine can be done with ANY stack. It is using a mem deck presentation that dupes the audience into thinking you have an extraordinary memory and great card counting skills.

Instinct/ Red and Black- This routine is using John Kennedy's method for a classic Red and Black effect. I have my own presentation and subtleties that make this a really unique visual piece that works on stage and for close up using two audience members.

Shuffle Tracking- Using a very clever idea by David Britland, this is a great way to convince the audience of your tracking skills but better still... Your spectator will also be able to track cards too! With this deck you will also be able to do an ACAAN. It is simple to perform and we talk about how to 'gaff' the deck.

Order- This routine is the penultimate effect in my show CHEAT. This is a piece that is very close to my heart. I usually perform it to music. A shuffled deck is restored to order through an impressive series of moves, deals and shuffles. Inspired by Daniel Madison.

In this lecture I also talk of the creative process in writing my show CHEAT.

Laura's interest in magic began when she was only 10 years old and just one week after her 18th birthday, she became the youngest female member of The Magic Circle, 16 years later, Laura is a member of the Inner Magic Circle with gold star.

Initially concentrating on a wide range of close-up magic, Laura now concentrates on cards and her exceptional skills have taken her to the 2016 Edinburgh Fringe in a show she devised and wrote herself 'Laura London: Cheat', receiving 4 star reviews across the board, she also reprised the show at the 'Secret Cellar' at London's Vaulty Towers.

Her close up and card skills have made her one of the most in demand magicians in London– with residencies that have included Café Royal, Rosewood hotel, The Savoy and the Hippodrome Casino. She is currently at the Café de Paris and Circus London.

Her performances at corporate and private parties have taken her around the world including Mumbai, Tokyo, Sydney, Dubai, New York, Hong Kong and Shanghai. Laura has had the great honour to perform on several occasions to His Royal Highness the Prince of Wales and also at Buckingham Palace for Her Majesty the Queen.
Laura's TV credits include ITV1’s 'The Next Great Magician' and 'Penn and Teller's 'Fool Us', 'The Magic Party' for BBC NI, 'Children In Need' and 'Playing Tricks'.

Further to all of this Laura has become an expert on the history of women in magic and is now being called upon the give talks on the subject.

Purchase this product and on October 28th anytime after 12:00pm Eastern, click the MyPenguinMagic area at the top of the Penguin site. You'll see the "learn" button appear next to this lecture.

Laura London Live Act Report this review
Verified buyer Pro Privacy ON (login to see reviewer names) on November 4th, 2018
I enjoyed this very much. The theatrical element of her work was refreshing and eye opening. Laura clearly has charm and a unique modern style. The material top notch and well thought out. Structure of the act is great, one story leading into another elevates the material to a different level.

Bottom line is she knows what’s up and how to present, that’s something you don’t see as often as you may believe. I personally think that’s half the battle to a successful performance.

If your just into learning new tricks that’s fine, you won’t be disappointed. But honestly you just may be missing the bigger picture.

Rock On Laura !
3 of 3 magicians found this helpful.
Did this review help you? Do you want to respond to this review?

Inspiring Report this review
Verified buyer Pro Privacy ON (login to see reviewer names) on November 25th, 2018
A really great performance followed by an interesting and insightful explanation. Laura is clearly a highly creative person and I loved her thinking behind her presentation. She's also got great skill, which she manages to make look easy whilst remaining as cool as a cucumber. Brilliant.
1 of 1 magicians found this helpful.
Did this review help you? Do you want to respond to this review?

great act Report this review
Verified buyer Pro Privacy ON (login to see reviewer names) on November 23rd, 2018
honestly haven't enjoyed the act style as much as the old lecture format - but did like this particular one a lot - both the theme of this act and the thinking and details going into putting it together.
Did this review help you? Do you want to respond to this review?

A lesson for boys Report this review
Verified buyer Pro Privacy ON (login to see reviewer names) on November 2nd, 2018
Laura London will take you to her world. A world where gambling and magic are one. The suspension of disbelief is dissected, as are many subtleties that you will discover in routines that are both classic and inovative.

A nice lesson also on the Greek deal...

A great Lecture.
Did this review help you? Do you want to respond to this review?

Nice lesson Report this review
Verified buyer Pro Privacy ON (login to see reviewer names) on November 1st, 2018
Technical, theatrical and emotional way to do a Gambling piece of Magic. Laura London will give you all facet of building her show. A great way to rethink yours. She thinks some classics in a universe created by the suspension of disbelief. Lady will give us a nice Greek Deal Lesson too.

You cannot miss this Lecture.

Spell and Charm.
Did this review help you? Do you want to respond to this review?