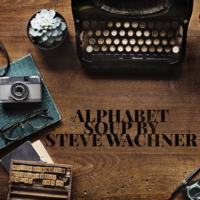 Today, when you order "Alphabet Soup by Steve Wachner", you'll instantly be emailed a Penguin Magic gift certificate. You can spend it on anything you like at Penguin, just like cash. Just complete your order as normal, and within seconds you'll get an email with your gift certificate.

Steve Wachner is one of Kenton Knepper's most famous, modern American students.

This is a collection of Anagram routines from Steve Wachner’s well received first two books Edison Notes and Tesla Files.

Whenever possible, pieces were freshened up with new writings (as well as completely new material) to supplement the routines.

Why anagrams? You can have them on you at all times. In Alphabet Soup, Steve aims to have any progressive anagram over as quickly as possible and make it appear that you are in control the entire time. This book is loaded with subtleties to improve your current and future anagram routines, as well as offering you some very clever full routines.

DGAF Card Pump - This is the original version of the opening essay to Tesla Files. It details Steve’s way of guessing a randomly thought of playing card, as well as his thoughts on real magic, failing, believability, and performing propless effects.

Academia - A fully scripted star sign routine that introduces the concept in a way that allows everyone to get invested in the routine. The script gives your audience a different way to view star signs - without isolating anyone’s beliefs. Included is a three letter star sign anagram. A very well known Mentalist has said that this routine is worth the price of Tesla Files on its own.

A Misinterpreted Ruse - A discussion with Warren Thackeray led to a beautiful way to always appear correct when you’re down to one of two star signs in an anagram. You’re going to be performing this immediately! Works with any star sign routines.

Anything in the World - Your spectator is able to create a list of options, change their mind multiple times, and you’re instantly able to begin to reveal letters from the word they’re thinking of - ending with a reveal of the exact word they thought of. This routine is cheeky, but super clever. The dual reality is cleaned up by implanting a supposed intention from your participant into the mind of the audience. This was a stand-out favorite from Edison Notes.

Modesto -A discussion into micro-anagrams that allow you to know instantly whether you can reveal a thought with no props or need to resort to a physical method. This allows you to use an anagram for large lists of items. Included is a full performance with a thought of U.S. state, complete with an Out.

Modesto Alternatives - A further discussion beyond the original routine from Edison Notes. This includes a micro anagram for European countries as well as an example using the Major Arcana Tarot cards.

Layover - a principle that can be used for Modesto or your standard routines. This is not anagram related and has not been released in Tesla Files or Edison Notes.

Tool C.A.S.E. - This final essay recaps all the individual anagram methods used throughout the book as well as a couple that didn’t get highlighted. This essay discusses how to always appear that you know, minimize misses, make the random order of letters make sense in performance, as well as when and how to get into anagrams in performance.

Also includes a Spanish version of the Academia Anagram.