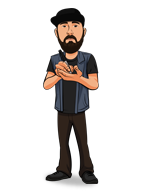 Today, when you order "King Arthur's Toothpick By Aaron Smith", you'll instantly be emailed a Penguin Magic gift certificate. You can spend it on anything you like at Penguin, just like cash. Just complete your order as normal, and within seconds you'll get an email with your gift certificate.

Light Heavy Chest meets The Sword in the Stone!

A big, strong guy from the audience rolls an ordinary paper napkin into a ball to represent the famous stone. The magician holds the "stone" at his fingertips as the guy chooses a toothpick to represent King Arthur's Excalibur.

The magician thrusts the "sword" into the napkin.

Try as he may, try as he might, the big, strong guy is unable to remove the toothpick from the napkin. I mean, the sword from the stone!

A young girl comes on stage, and easily removes the toothpick. She renounces the crown, and puts the sword back in the stone. Once again, the man is unable to remove it.

The little girl plucks the toothpick from the stone, and keeps it as a souvenir. The man keeps the napkin for the sweat on his brow.

King Arthur's Toothpick comes with a clever little gimmick that does all the hard work, instructions, and enough toothpicks to get you started.