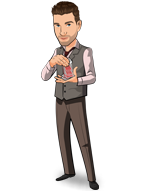 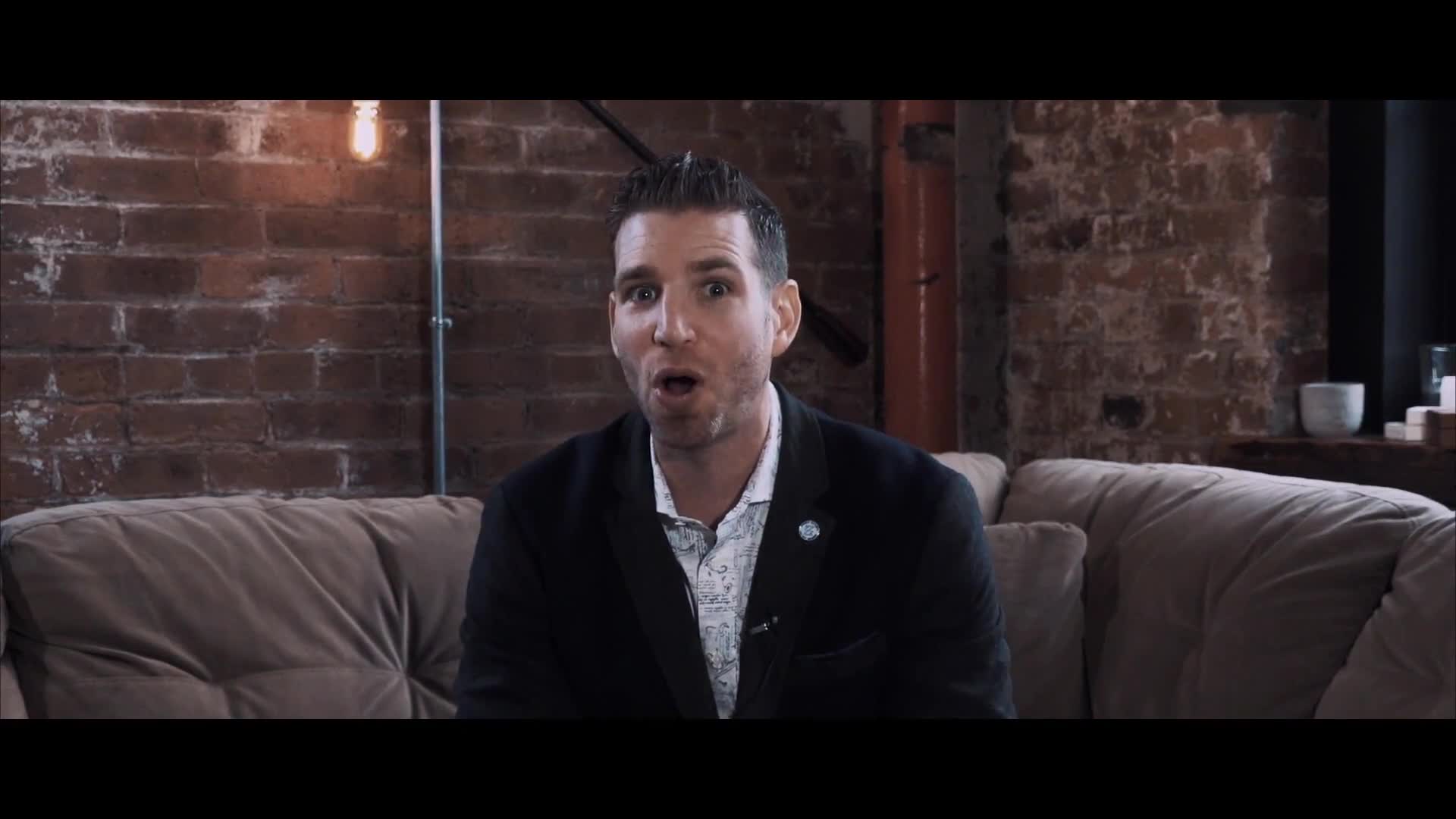 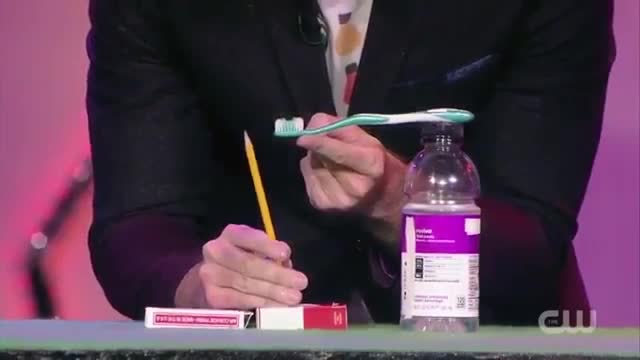 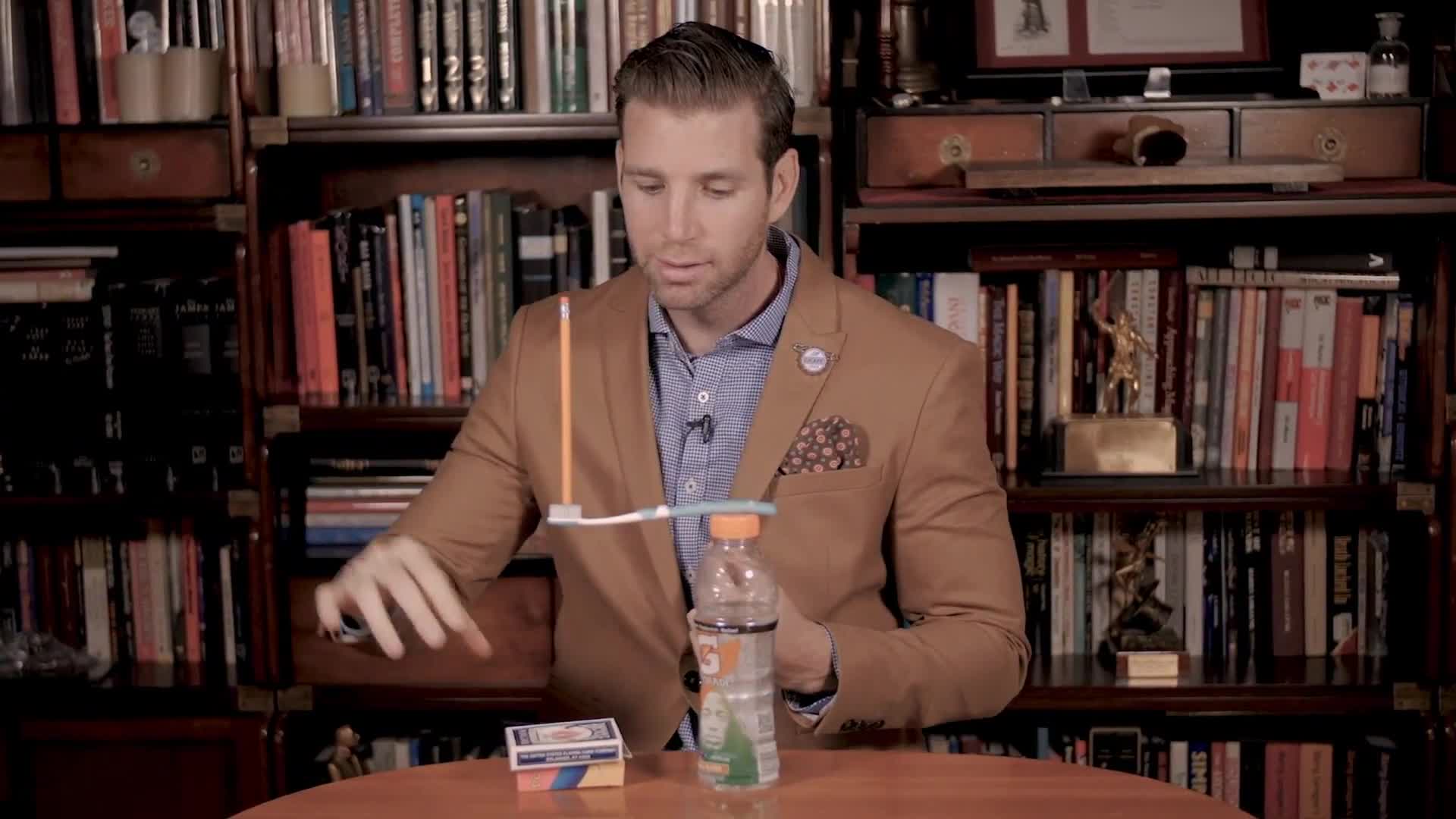 Today, when you order "Balance (Gimmicks and Online Instructions) by Joshua Jay", you'll instantly be emailed a Penguin Magic gift certificate. You can spend it on anything you like at Penguin, just like cash. Just complete your order as normal, and within seconds you'll get an email with your gift certificate.

First came "Inferno," which won Trick of the Year in 2012. Then came "Out of Sight," which fooled Penn & Teller. After eight years of development, performed exclusively at the end of Joshua Jay's parlor shows, he is ready to unveil a sensational, unique wonder... AND SAVE if you buy early because the retail price goes up $50 on January 1st, 2019.

Balance features the rarest effect in magic: suspension. An eclectic but ordinary group of objects is passed out for close examination: a bottle, a card box, a pencil, a toothbrush, and a crayon box. NOTHING sticky, no strings - totally normal.

The objects are collected and, one by one, the objects are stacked, first in ways that seem impressive but possible, and then in ways that are COMPLETELY impossible. At the end, your audience is left with a stunning, impossible sculpture -- each object hanging impossibly in the air without explanation.

Balance is the perfect closer or encore piece for a parlor show because it is SO unlike anything else that would appear in a magic show. And unlike most magic, Balance LIVES in a state of impossibility. With every phase you build, the magic is staring at your audience, even after you've left the stage.

A New Kind of Magic: One thing Joshua didn't expect as he developed Balance is the unusual, 21st-century quality associated with it. People HAVE to take pictures of it. They can't help themselves. It's too unusual NOT to remember, and everyone wants to take home evidence of what they've seen. Over time, Joshua has learned to lean into this, actually allowing his audiences to film it and get pictures of it afterward.

A Stunning Package of Props: You receive everything you need to perform Balance in a beautiful foil-encrusted box. Your props for the trick are kept in a velvet box that allows you to switch the examined objects for the specially-made props imperceptibly onstage, without any special pockets or servante. The hinged box has protective "wings," so you can perform Balance virtually surrounded. You receive ten hand-crafted props that have each been designed under Josh's watchful eye. And, you get Joshua Jay on video, one of magic's best teachers, taking you through every detail of the routine.

Perform it Immediately: Joshua's creations take years to develop and, in some cases, years of practice to perform. Happily, Balance can be performed within MINUTES of opening the box for the first time. The only skill you'll need is FAKING the difficulty of doing it.

Exclusivity: Due to the extremely intense manufacturing process, and the years of development, Balance is offered at $200. When you SEE the package, you'll realize what a bargain this is. The whole package exudes quality, and this is a small investment in what will become the closing piece of your show. And, the price will necessarily keep the routine from becoming over-exposed. You will likely be the only one in your area performing Balance.

Quality You Can't Fake: Joshua Jay does NOT release magic often. We get a glimpse into his creative process every five years or so, when he releases something new. That's why his magic -- from "Triad Coins" to "Inferno" to "Out of Sight" -- is IMMEDIATELY snatched up upon release, and it's hard to keep his creations in stock. He thinks through every aspect of an effect, from the theatrics to the product design, right down to how to reset between shows. THAT is what you're investing in with Balance: years of painstaking detail.

Felt a little off balance... Report this review
Verified buyer Pro Privacy ON (login to see reviewer names) on December 28th, 2018
Just got my Balance gimmicks. First, I would say I would have happily paid 50$ less and not had all of the unnecessary fancy packaging. I can see the price being what it is for the construction it took to put this puzzle together. But, for the most part, am afraid without it's ability to collapse at the end of the effect (or the tedious nature of disassembling it at the end of the act/routine), it won't play to an educated audience. If you think you know how it's done, you probably do, and could configure your own. Like many magic effects, buyers remorse on this one.
11 of 11 magicians found this helpful.
Did this review help you? Do you want to respond to this review?

Balance Report this review
Pro Privacy ON (login to see reviewer names) on December 12th, 2018
The trailer was intriguing, but thought the price a little high. Nevertheless I splurged. Just got my Balance and it is everything they advertised. Everything!! is of the highest quality. Be sure and read the Caveat about viewing the instructional video before opening. The instructions are crisp and easy to follow, so I am slowly unpacking as I re-watch the video because there are a few things you want to be familiar with before you begin practicing this. Looking forward to dropping this on the family first at Christmas. Great job Mr. Jay!!!
6 of 8 magicians found this helpful.
Did this review help you? 7 comments

3 of 3 magicians found this helpful.
Did this review help you? 1 comment

Worth the Price Report this review
Verified buyer Pro Privacy ON (login to see reviewer names) on December 24th, 2018
As a worker in some very noisy venues this is perfect. The props are well made, the instructions are succinct and to the point...not to mention very clear. The only thing missing is the same ingredient that is absent from any illusion worth doing---Your imagination and presentation. I have done this on a small stage, in a parlor show and a couple of times while sitting casually in a bar setting. Always gets a strong response and I also use it for photos with audience members.
Glad I bought this!
2 of 2 magicians found this helpful.
Did this review help you? Do you want to respond to this review?

Great but.. Report this review
Pro Privacy ON (login to see reviewer names) on January 1st, 2019
I think this effect is great but only if you have a place for it. I think this is best for stage and
2 of 3 magicians found this helpful.
Did this review help you? Do you want to respond to this review?

Balance Review Report this review
Verified buyer Pro Privacy ON (login to see reviewer names) on August 21st, 2019
This trick is very well constructed. I am pleased with the amount of repair tools included, as well. The trick does take some getting used to as far as performance, but over all it was ready to perform out of the box. I can't wait to perform this at my next event!
Did this review help you? Do you want to respond to this review?

great but... Report this review
Pro Privacy ON (login to see reviewer names) on April 7th, 2019
I would have liked it better if it came with the other box.
Josh shows us an alternate box that would make the trick go much smoother and eliminate the need for any cover story. I would pay extra for that box.
Did this review help you? Do you want to respond to this review?

John Report this review
Verified buyer Pro Privacy ON (login to see reviewer names) on March 28th, 2019
Love it!
Did this review help you? Do you want to respond to this review?

Dear Friend Report this review
Verified buyer Pro Privacy ON (login to see reviewer names) on January 18th, 2019
Balance is a great and well thought out effect. I am not sure it is conducive to close up, even though it could work.

Balance is perfect for parlor and stage!

It is amazing the work that has gone into Balance, I have not truly tested Balance, but it should stand up to the test of an interesting and fun effect.


Many years ago I loved a deck balance and used it often, but it was not as extensive as Balance.
Did this review help you? Do you want to respond to this review?
Bestsellers