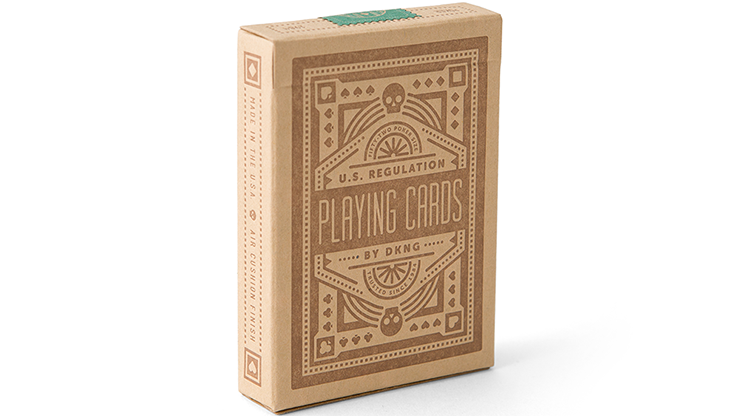 Today, when you order "Green Wheel Playing Cards (Limited Edition) by Art of Play", you'll instantly be emailed a Penguin Magic gift certificate. You can spend it on anything you like at Penguin, just like cash. Just complete your order as normal, and within seconds you'll get an email with your gift certificate.

One of our most popular decks, now available in Green!

Created in collaboration with California-based creative studio, DKNG. Green Wheel Playing Cards offers a fresh interpretation of the classic Bicycle Rider Back. The updated design is crisp and playful. Now, for a limited time, it's available in an eco-inspired green and brown colorway.

The deck features 54 custom-illustrated playing cards printed by the US Playing Card Co. on our trademark thin-stock, preferred by cardists. Housed inside a recycled tuck box and letterpress-printed in tonal brown. Sealed with a green tax stamp.

natural follow-up to the classic Red Wheel and Blue Wheel decks Report this review
Pro Privacy ON (login to see reviewer names) on September 13th, 2018
Art of Play have previously done a collaboration with DKNG Studios from California, which produced the delightful DKNG decks. These twin decks in red and blue, named Red Wheel and Blue Wheel respectively, also came inside a beautiful laser engraved wooden case as part of the attractive DKNG Gaming Set, and were intended as a fresh interpretation of the classic Bicycle rider back, with a bicycle design being prominent. This popular deck now heads to a new eco-friendly colour scheme as the Green Wheel deck.

The tuck box has a very similar look to the original deck, but has a muted brown paper bag look. The original decks already had a matt finish like this deck, but that effect is amplified here in the Green Wheel deck with the use of brown colours. A custom seal in vibrant green gives a hint as to what we'll find inside. Anyone familiar with the classic Red Wheel and Blue Wheel decks will immediately recognize the design of the card backs, which are now presented in a stark green. The Bicycle influence is clearly evident, and despite the bold design, the green colour ensures that it still has a natural look. The card backs may look symmetrical, but if you observe the corners closely, you'll see that all four suits are represented, meaning that it is a very clever and subtle one-way design that will escape notice from most. Like the tuck box and Jokers, small skulls are also featured on the card backs.

One of the things I loved most about the original Red Wheel and Blue Wheel decks were the pips, which were split in half and used metallic gold for the Red deck and metallic silver for the Blue deck. The split-pip design is the same here, but now has two tones of brown for the Spade/Club pips to keep us close to our roots, down to earth, and environmentally friendly; while there's a lovely combination of green and gold for the Heart/Diamond pips. Unlike the previous decks, there's no metallic inks to be seen here, however, and it wouldn't be in keeping with the concept of a more natural look either. One of my favourite cards is the Ace of Spades, with a gorgeous illustration of a bicycle inside the giant two-tone pip. In fact, all the Aces are stunning examples of clean and stylized design. For the rest the graphic design is inherited entirely from its popular predecessors, but using green and brown as the chief colours.

This deck has a very different feel from the original Red Wheel and Blue Wheel decks, and yet very clearly belongs to the same family, with a unity of design, and the same thin-crush stock for good handling. Unlike its more classy brothers that preferred to present themselves with gold and silver accessories, however, this is the more down-to-earth and outdoorsy member of the family, that prefers to go on hikes and spend time in nature. Comfortable and casual, it will also feel right at home in the hands of every cardist and card player. - BGG reviewer EndersGame
Did this review help you? Do you want to respond to this review?
Bestsellers