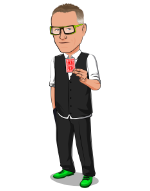 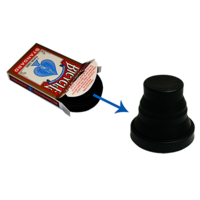 Today, when you order "Harmonica Chop Cup Black (Silicon) by Leo Smetsers", you'll instantly be emailed a Penguin Magic gift certificate. You can spend it on anything you like at Penguin, just like cash. Just complete your order as normal, and within seconds you'll get an email with your gift certificate.

This harmonica chop-cup is a dream for every magician and a first class magic prop. The cup is foldable and returns to normal size in no time. It's just a must have!

The silicone cup is folded very small in size and can easily be easily fit in the pocket of your jacket or pants, or even in the handkerchief pocket of your jacket. A nice touch is to put it in the box of a set of cards. Tell your audience that yesterday, when bringing out the cards they responded: "Oh no, please no more card tricks!", so you've instantly turned the cards into a cup!

NOTE: Cup is shimmed, magnetic balls NOT INCLUDED but are required. Can only be used with Leo Smetsers Chop Cup Balls.

Unlimited Possibilities! Report this review
Verified buyer Pro Privacy ON (login to see reviewer names) on June 7th, 2014
I'm having so much fun with the Harmonica Chop Cup that I bought a second one! Guess what? They nest! So you can do a two cup routine, load just about anything silently, and still have tons of room in your close up case. Thanks Leo - great idea!
4 of 4 magicians found this helpful.
Did this review help you? 1 comment

Well worth it if you use the chop cup Report this review
Verified buyer Pro Privacy ON (login to see reviewer names) on January 21st, 2017
I received the Harmonica Chop Cup (black) and tried to put it into rehearsal. Unfortunately, no balls were included. I tried to use the balls from one, then another set that I have, but they did not work. There was no 'staying power' with either set, though they work very well with their original cups.

I had to buy a set of balls - one 'adjustable' and a matching one from Rings-N-Things, and, as expected, I had to make major adjustments in order to tune the effect.

Having to make the additional purchase was significant and increased the cost of the effect much more than should have.

The round metal box that the cup comes in is nice, but very thin and I doubt if it will stand up to a working magician's needs without soon being too bent to use.

The cup itself is a good size, though the definition of that term will vary from performer to performer, and the color is consistent throughout.

It collapses with a bit of manipulation, but that is to be expected.

Overall, I expect to use this cup during walk-around and table-hopping. That makes it a usable prop with an advantages for being a bit unusual and for being collapsible.

If it had included a set of balls, as all of my other chop cups have, my rating would have been higher. It would have been acceptable if I could have used balls from another set. Having to buy a set of balls in order to obtain an adjustable ball (which cost me both time and not a little money) was a strong negative.
3 of 3 magicians found this helpful.
Did this review help you? Do you want to respond to this review?

Great Prop!
Did this review help you? Do you want to respond to this review?
Bestsellers