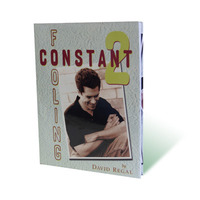 Today, when you order "Constant Fooling Volume 2 by David Regal - Book", you'll instantly be emailed a Penguin Magic gift certificate. You can spend it on anything you like at Penguin, just like cash. Just complete your order as normal, and within seconds you'll get an email with your gift certificate.

The second part of Constant Fooling, contains an assortment of unique card magic utilizing prepared or altered cards, mental mysteries, a chapter dedicated to exceptional card effects which utilize a technological breakthrough, bills and currency, gaffed decks and a standout card routine which tells a story. Continue fooling your audiences with the following:

A spectator freely deals down to a "Lucky Card" . . . that happens to match the card in the magician's wallet.

The deck is tossed onto a small but lethal mousetrap which snaps shut-trapping the selection as cards scatter.

A late psychic's scrap of paper predicts the actions of a spectator.

A freely-selected card rises from a deck, using a gimmick you can make in one minute.

Spectators randomly deal the deck into piles, perfectly separating the four suits in the process. Fifty-one cards are eliminated in the fairest possible manner from an examined deck, leaving a single card that matches a prediction. Mr. Regal's favorite platform item.

A signed playing card changes places with a pocketed Joker-with clean hands and no palming.

A signed card rises to the top of a deck that is tied with string. The deck can then be used for further miracles.

A borrowed bill cleanly changes into a hundred dollar bill, via a new method that doesn't utilize a thumb tip.

A story of life "after hours" is told with a deck of cards. A showpiece guaranteed to garner applause.