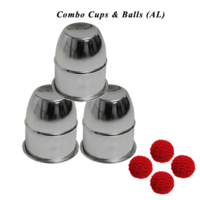 Today, when you order "Combo Cups & Balls (AL) by Premium magic", you'll instantly be emailed a Penguin Magic gift certificate. You can spend it on anything you like at Penguin, just like cash. Just complete your order as normal, and within seconds you'll get an email with your gift certificate.

(3 customer reviews)
+ Add to Cart
Review Wishlist
In stock: usually ships within 24 hours!
Order in the next 6 hours 27 minutes and it will ship TODAY!
cups-and-balls
street
Tweet

The Chop Cup is a mechanical version of the classic Cups and Balls trick.

The performer shows three cups which are empty, and places them on the table. Giving one cup a tap with his wand he lifts it to find a small ball underneath. The ball is vanished only to re-appear under another cup! This is replaced under the cup, but the magic tap causes it to vanish and appear under the cup at the far end. Another ball is discovered and vanished and then another. On lifting the last cup all three balls are found beneath it. Or better produce an onion, lemon and potato beneath the cups as climax. Many variations of routines are possible and available in standard books on magic. Cups are seamless, spun aluminum and one is gimmicked.

Gimmick too weak Report this review
Verified buyer Pro Privacy ON (login to see reviewer names) on June 8th, 2016
They look nice, and as a regular cups and balls set they are fine. The cups are a little light. However the chop cup is pretty much useless. I tried using it very gently and carefully in performances but its too sensitive and "weak" so it would fail and caused me to mess up a few times. The ball just falls out, it barely even stays.. I would have returned it if I didn't take so long to try it. Going to invest in a better chop cup that actually works.
1 of 1 magicians found this helpful.
Did this review help you? Do you want to respond to this review?

Combo Cups and Balls Report this review
Verified buyer Pro Privacy ON (login to see reviewer names) on February 9th, 2015
Most happy with my purchase of Combo Cups and Balls from
Premium Magic. Great quality and price,and one of the best entertaining tricks you can find.
Jack Markley
1 of 1 magicians found this helpful.
Did this review help you? Do you want to respond to this review?

Combo cups & balls Report this review
Verified buyer Pro Privacy ON (login to see reviewer names) on December 31st, 2019
just what I was looking for. Would have given 5 stars except magnetic ball is not strong enough to stay in cup.
Did this review help you? Do you want to respond to this review?
Bestsellers