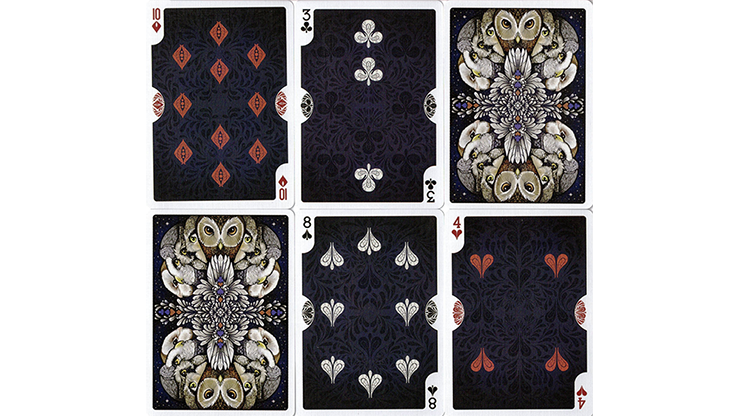 Today, when you order "Bicycle Strigiformes Owl Playing Cards", you'll instantly be emailed a Penguin Magic gift certificate. You can spend it on anything you like at Penguin, just like cash. Just complete your order as normal, and within seconds you'll get an email with your gift certificate.

For centuries, owls have been revered for their grace, power, and beauty. Alternately a symbol of wisdom or a harbinger of death, these creatures mean many things to many different cultures. Now you can hold all the allure these avians have to offer in your hands, in Strigiformes: A Deck of Owls. Each card is hand illustrated, with fully custom courts, pips, Jokers, Aces, and a custom back. Seventeen owl species have been carefully selected for each suit, from the amusing burrowing owl to the regal Eurasian eagle owl.

Tarot, royal and nature symbolism is used throughout the deck. Small indexes and medium borders make for great-looking fans. This deck is a perfect addition to your collection, next game, magic trick or cardistry routine.

One of the most stunning custom decks I've seen recently! Report this review
Pro Privacy ON (login to see reviewer names) on August 28th, 2018
Given the legacy of the owl as a wise old bird, choosing the Strigiformes Owl deck certainly has wisdom associated with it! Strigiformes is the scientific name for the order that solitary and nocturnal birds like owls belong to. This deck was produced as a collaborative project between artist Renee LeCompte and playing card publisher Will Roya, who is now an experienced Kickstarter creator, and has a growing record of fulfilling projects speedily. The fact that this project was generously crowdfunded by more than 200% of its goal is an indicator of its appeal.

Wow, is this ever an amazing deck! The artwork has just the right colour combinations to give a real nocturnal feel, with dark colours. That's immediately evident with the tuck box, which confronts us with a gorgeous owl with outstretched wings, and has an individually numbered seal that the collector will appreciate.

The artwork on the cards is incredible, starting with the card backs, which have a starry and dark night-sky background filled with a carefully designed symmetrical pattern constructed from detailed owl related images like eyes and feathers. The Aces are all unique, featuring a full one-way image of an owl, asymmetrically counter-balanced by an intricate and exquisite design that features the suit of the card in a frosted white.

I'm especially smitten with the court cards, each of which features a different owl. Close observation will also reveal how imagery from the Tarot has been incorporated, with the owls on Spades holding Swords, Diamonds holding Pentacles (Disks), Clubs holding Wands (Staves), and Hearts holding Cups (Chalices). It's not just the artwork here that it stunning, but it is accompanied with a gorgeous graphic design that fits perfectly with the overall style of the deck. The narrow borders are on target, and help enhance the stylish feel.

But the number cards are great too, with highly customized pips, and intricate and ornate detail. Notice also how there are ornate versions of the suit pips on both left and right borders, which adds elegance and style, making this deck really stand out from the mediocre offerings sometimes appearing on the market these days. For extra effect, the suit pips also appear throughout the cards as dark shadows, although you'll only notice this if you look very carefully. Beside the 13 cards in all four suits, we also get two mischievous jokers. And for our magic loving friends, there's two gaff cards: a bonus Joker with a reveal, and a novelty 21 of Spades with artwork depicting an owl skeleton.

With USPCC printing, handling is good as well. This deck is far from standard, but as a novelty or custom deck, it's one of my recent favourites. Highly recommended! - BGG reviewer EndersGame