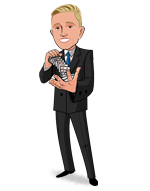 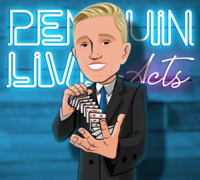 Today, when you order "Sebastian LIVE ACT", you'll instantly be emailed a Penguin Magic gift certificate. You can spend it on anything you like at Penguin, just like cash. Just complete your order as normal, and within seconds you'll get an email with your gift certificate.

"One of the most skilled performers I have ever seen." -Dan Harlan

"Sebastian is one of Orlando’s best kept secrets" -Ryan Schlutz

Shake Change- Sebastian’s updated handling for a classic sleight which has blown away some of the biggest names in magic.

Thought of Triumph- A triumph routine inspired by Kostya Kimlat and Tyler Wilson. A deck of cards is fairly mixed face up into face down. Three audience members think of playing cards before deciding as a group which selection they will use. The deck is then shown to be fixed aside from the thought of card that was chosen, the other two cards that weren’t selected are no longer in the deck and revealed in the performer’s pocket as a kicker finale.

3 Card Location- Based on an Ed Marlo routine, three cards are cut to and memorized before their respective portions are shuffled. In an increasingly impossible fashion the cards are revealed one by one.

How to Find Your Other Half- Woody Aragon’s now classic card routine; where each spectator is given four random playing cards and makes decisions as the cards are ripped in half, mixed, thrown away at random and traded with their neighbor. Even after all this "chaos" an impossible "hands off" miracle is revealed at the end.

Chronologue- A Bob Cassidy routine that begins with a journal and an envelope being passed out for the audience to hold onto and examine. A date is freely named, GENUINELY FREE CHOICE, and the playing card written on that date is revealed inside the envelope that another spectator has been holding since the beginning!

The Envelope Test- A set of envelopes numbered 1 through 5 are shuffled by an audience member. Four of the envelopes are chosen, leaving the performer with the envelope that has the “prize” inside. The other four envelopes are then revealed to have a secret message hidden inside which brings the show to a climactic finish.

Originally born in Oslo, Norway, his family moved to the United States where Sebastian began his journey into the world of magic. It all began when a classmate astounded him with a simple card trick.

He then joined the International Brotherhood of Magicians and was awarded the "Future Stars of Magic Award" for his exceptional talent. He quickly went on to become the youngest performer to be crowned "Florida State Close-Up Champion of Magic" two years in a row, Taking second place at the International Youth Championships of Magic, and starring in the Society of American Magician’s first ever "Stars of Tomorrow Close Up Show" in Las Vegas.

Purchase this product and on February 17th anytime after 12:00pm Eastern, click the MyPenguinMagic area at the top of the Penguin site. You'll see the "learn" button appear next to this lecture.

You can tell he's been doing this for years Report this review
Pro Privacy ON (login to see reviewer names) on March 26th, 2019
I really enjoyed this act. You can tell from the performance alone that Sebastian is a seasoned performer and has performed this act many times. He goes through all the moves and subtleties needed, along with some amazing tips on the shake change. His closing trick with the envelopes is a killer ending to the show and something I will be using myself. Highly recommended
3 of 3 magicians found this helpful.
Did this review help you? Do you want to respond to this review?

great show, the guy is genious Report this review
Verified buyer Pro Privacy ON (login to see reviewer names) on June 22nd, 2019
well this show is great. great magic tricks, pretty high level though and he doesnt get into detail with every move, he expects you to know them already.. so not recommended for everyone, but very recommended for advanced magicians.
2 of 2 magicians found this helpful.
Did this review help you? Do you want to respond to this review?

Some very entertaining material Report this review
Verified buyer Pro Privacy ON (login to see reviewer names) on March 27th, 2019
Sebastian demonstrated some very entertaining effects and explained them very well, but a number of them are not for the faint of heart. You will not be performing them minutes after you watch the program.
A number of his effects are based upon a memorized card stack which some people find daunting or too time consuming.

I enjoyed watching and recommend it to see how well he performs the material and may well teach you something new and encourage you to expand your horizons to be able to use his material.
2 of 2 magicians found this helpful.
Did this review help you? Do you want to respond to this review?

Good start Report this review
Verified buyer Pro Privacy ON (login to see reviewer names) on March 19th, 2019
He's got a good start going.
He is really a fine slight of hand magician and I can see that in years his acting style and persona will improve.
This is really worth watching and following Sebastian as he slowly improves his stage appearance and style
2 of 2 magicians found this helpful.
Did this review help you? Do you want to respond to this review?

Amazing act takes up no space Report this review
Pro Privacy ON (login to see reviewer names) on March 9th, 2019
Sebastian has put together an act that fills 20+ minutes perfectly and slays that timeframe. It's filled with strong magic, technically challenging sleights, and great audience interaction. This Live Act provides an amazing show that will require practice to execute, but has some of the strongest magic I've ever seen. Good variety from Mentalism to Card Effects, all with an incredible impact. Highly recommended.
2 of 2 magicians found this helpful.
Did this review help you? Do you want to respond to this review?

Entertaining and informative Report this review
Verified buyer Pro Privacy ON (login to see reviewer names) on March 1st, 2019
Sebastian really seems like a nice guy and the act truly is portable. You can basically walk onstage and offstage with nothing in your hands and the entire 30-minute act in your pockets. The downside to this act is you will need a memorized stack for some of the card tricks, and the Triumph effect will require you to do a rather difficult sleight that fooled Penn & Teller. The "Find Your Other Half" routine by Woody Aragon is a great way to involve the entire audience in a routine (though the clean-up crew at your venue will curse your name forever). It's something Penn & Teller do at their Vegas show and is truly astonishing to the crowd. Not difficult to execute as long as you can remember the instructions perfectly.

This act isn't something you'll necessarily watch today and perform tonight. It is fun to watch and obviously would be cool to have in your arsenal if you needed it, but this is a technically-demanding routine in some parts so prepare to put in a bit of practice.


2 of 2 magicians found this helpful.
Did this review help you? 1 comment

Too young to be THIS good! Report this review
Pro Privacy ON (login to see reviewer names) on March 4th, 2019
I have worked with Sebastian for years and this guy is no joke! He is a force to be reckoned with in the close-up magic community. I can't recommend his material enough. I might be coming from a biased viewpoint, but I have seen this routine in action A LOT. And it kills. It plays for magicians and laymen alike. Yes, this material has difficult moves. GOOD. It should. If you want to do this routine, you should have to work for it.
2 of 3 magicians found this helpful.
Did this review help you? Do you want to respond to this review?
Bestsellers