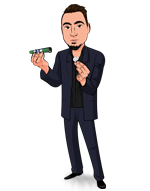 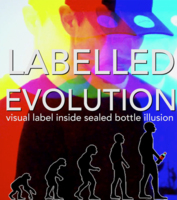 Today, when you order "Labelled Evolution By Ben Williams", you'll instantly be emailed a Penguin Magic gift certificate. You can spend it on anything you like at Penguin, just like cash. Just complete your order as normal, and within seconds you'll get an email with your gift certificate.

Labelled Evolution is all of Ben Williams’ best work to date on the label inside bottle illusion.

'Ben Williams is a genius! Labelled is a rare miracle with no explanation for the spectator. You are not just buying a trick here, you are buying a brilliant and passionate man’s “life work” on an impossible effect.'
- Richard Sanders

'When you thought a classic couldn't get any better Ben drops this! Don't think about getting this, just do it!'
- Luke Dancy

'Labelled Evolution is just next level visual magic that you can not only perform but you can give it away! Outstanding!'
- Kieron Johnson

'This is incredible! It's eye candy, you won't be doing coin in bottle any more after learning this!'
- Ryan Tricks

'Labelled has been in my close up set for around 10 years. Labelled Evolution will ensure it will remain in my act for at least 10 more'
- Alan Rorrison

'Honestly, I think this is f***ing brilliant!'
- Joel Dickinson

Labelled has been one of my favourite tricks to perform for years and I didn’t think it could get any better. I was wrong! Ben has taken it to a whole new level!
Damien O’Brien - Killer Magic BBC Three

Within this 3 hour download video you will learn many different versions of his effect, Labelled. This really is a huge compilation of ideas and methods guaranteed to have something for everyone.

You fairly show the spectator a Cola bottle and write something on the label, even peeling it back to show the contents of the bottle are perfectly ordinary underneath. With a casual shake, the spectator will see the marked label VISUALLY MELT inside the bottle, before their eyes. You can instantly hand it out for examination and leave it as a memorable souvenir with your spectator FOREVER! Everything is fully inspectable, even if they if open up the bottle to take the label out.

Labelled was originally created back in 2004 and was well received throughout the magic community. However, despite its success, there were some drawbacks to the effect; you weren’t free to place the bottle down; you could not show the spectator that there was no label inside; and there was no way to begin the routine with any sort of inspection. Ben has spent the past ten years developing and refining his effect, eradicating these restrictions and leaving you with one of the most detailed and visual illusions he has ever created.

- A variety of methods for performing Labelled with different set ups, so you can choose your favourite method. From fast performances to full routines, Ben shares all of his best work on the plot, including his theory and ideas on how best to introduce the effect.

- How to peel back or remove a label entirely from a bottle prior to performing the effect, showing there is no label inside the bottle already. This is huge development and will silence any skeptic.

An almost impromptu version of label through bottle that can be done with a borrowed bottle and has the SPECTATOR’S SIGNATURE on the label.

- His method for removing a cap from a drinks bottle without breaking the seal; this method is now streamlined to be fast and effective. You can easily remove 4 or 5 bottle caps in the time it takes to make a cup of coffee, you will literally see him do this on the download (Ben likes his coffee!). This method alone is invaluable if you perform ANY routine with a drinks bottle.

- His personal parlour performance of Labelled, perfect for special occasions, top tables and important clients; guaranteed to make an impact.

- Multiple ways to make the label penetrate the bottle. He even teaches a way to perform the penetration whilst the SPECTATOR IS HOLDING THE BOTTLE!

- A bonus effect, his souvenir coin in bottle routine. After a coin is melted through the side of the bottle the spectator holds, you reseal the cap onto the bottle, permanently trapping the coin inside. This is the perfect coin in bottle for a seemingly impromptu street magic trick.

Is the bottle really factory sealed?

Yes, it is not an illusion or simply glued back together, the factory seal on the official cap is genuinely unbroken.

Can the bottle be closely examined after the effect?

Yes! In fact it is important to have it closely examined! This is part of the beauty of the effect.

Can you give the bottle away as a souvenir?

Yes, Ben rarely ever keeps a Labelled bottle after performing it, he has had many people over the years message him to say they treasure the bottle and have not and will not ever get rid of it!

Is the set up easy?

Ben teaches you his most streamlined way to prepare the effect. It will take a little bit of practice but it is not too hard to do at all. If you keep the bottle after performing the effect you can reset in seconds. As half of the prep is reusable you will rarely ever have to remake those parts to the effect. If you give the bottle out you will of course ned to prepare that part of the effect again.

Is it hard to perform?

No, in fact the effect is so easy to perform it is ridiculous! Once set up you will find yourself fooling yourself in the mirror within no time!

Can the bottle examined before the effect?

Yes, if you so desire! One great development is that Ben has worked on the routining so you can start the effect with a bottle that is bought from a shop so it is of course 100% examinable. Imagine this for a social media video! With this subtlety and the other convincers like peeling back and writing on the label you have the ultimate illusion.

A College Course in the Labelled Premise! Report this review
Pro Privacy ON (login to see reviewer names) on February 4th, 2019
Ben Williams has given the Magic world quite a few gems, and this is no different. He goes over and beyond in this course to teach you as many methods/techniques as possible to achieve the label in bottle effect. I thoroughly enjoyed this project.
Ben literally leaves no stoned unturned. Yes, there is some set up involved here in MOST of the methods. But for the knowledge and techniques you learn here, the cost is next to nothing in comparison to the value. Not only do you learn a flawless technique in removing factory sealed caps, undamaged (which the knowledge alone could lead to infinite impossibilities), you also learn an impromptu version (does require small set up, but do it once and it instantly resets from there on out).
He has also structured a power house routine which involves a prediction, an angle Z type effect with a selected card, and finally the label AND card corner penetrate the SEALED bottle)
As many other great magicians have already praised this project, I cant give it high enough regard because I think no matter who you are or what kind of magic you perform, after watching this you walk away with new ideas and a new perspective on routines you could come up with just by applying some of the techniques.
Everything is very clearly taught, good camera angles, good live performances, a fun/entertaining style of teaching reminiscent of some of my favorite teachers like Richard Sanders and Jay Sankey. Ben does not just go through this like a tutorial, it's almost presented as a conversational lecture he's having with you throughout, giving tips, showing you the things that CAN go wrong, showing you the parts that can be frustrating and walking you through all of that to keep you comfortable with handling his creation.
I recommend this to any magicians, and I can not wait to see what Ben brings to the table in the future!
4 of 5 magicians found this helpful.
Did this review help you? 1 comment

Evolution in Motion Report this review
Pro Privacy ON (login to see reviewer names) on February 8th, 2019
You gotta love Ben for keeping the dream alive!

He is relentless with the label magic.
Did this review help you? Do you want to respond to this review?

Real magic is this Report this review
Pro Privacy ON (login to see reviewer names) on February 7th, 2019
Well can I say that hasn’t already been said before....
This is absolutely mind blowing.
What Ben has given us here is the gift that just keeps on giving
I know this will just stay in my repertoire for ever.

If you’re looking for something that will jleave your audience completely speechless then this is for you.
Well done Ben & thank you so much for sharing this gem with us
Did this review help you? Do you want to respond to this review?

A classic taken to another level Report this review
Pro Privacy ON (login to see reviewer names) on February 5th, 2019
Labelled is a classic. This one is Labelled, Re-Labbeled and much much more. Ben has made it perfect and the new teaching is spot on.
Did this review help you? Do you want to respond to this review?

Awesome just ridiculously awesome! Report this review
Pro Privacy ON (login to see reviewer names) on January 31st, 2019
Wow Ben has created a real unexpected miracle.
Think about it, how many times have you pulled out a deck of cards only to see a spectator roll their eyes whilst muttering something like “oh wow you’re gonna show us a card trick” ?
Well that will never happen with this because you’re audience will never see the trick coming, in fact they’ll most likely assume you’re just thirsty & having a quick refreshment break.
What Ben has given our community is the gift that keeps on giving
I can’t wait to start using this
Luxuria Mentis
Did this review help you? Do you want to respond to this review?

Awesome! Report this review
Pro Privacy ON (login to see reviewer names) on January 31st, 2019
I had labelled long ago when it was first out and enjoyed perform it during the days when i still did magic on the street. Over the years, i have gotten to know Ben and when he announced that he was doing an expanded update on the labelled project i was looking forward to it. This was way way more than what i expected and it is very practical for a worker like me.I will safe it for a special table or client i want to impress. Nice one Ben, as always!
Did this review help you? Do you want to respond to this review?
Bestsellers