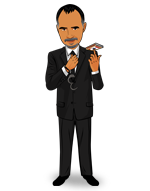 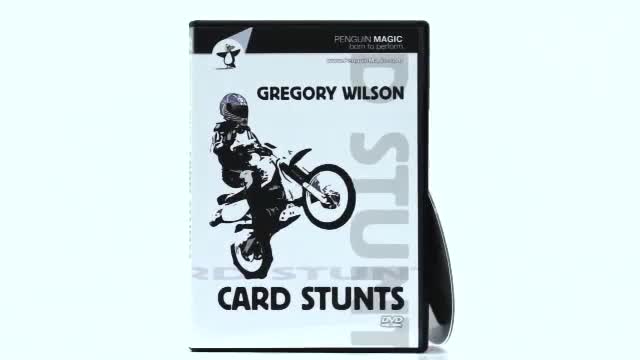 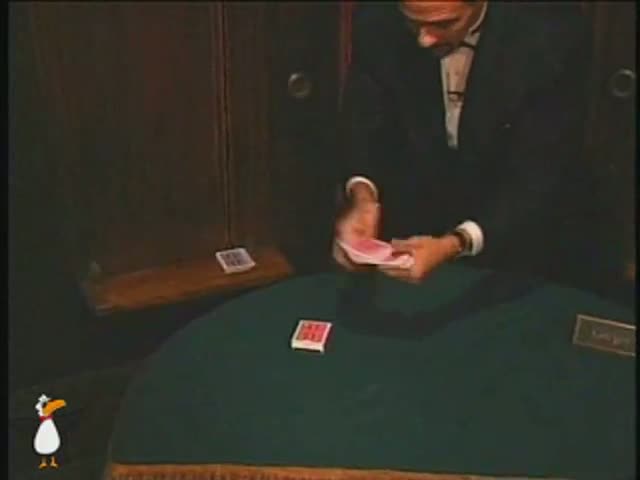 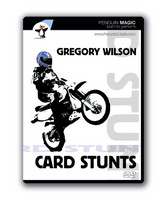 Today, when you order "Card Stunts with Gregory Wilson", you'll instantly be emailed a Penguin Magic gift certificate. You can spend it on anything you like at Penguin, just like cash. Just complete your order as normal, and within seconds you'll get an email with your gift certificate.

This is extremely visual card magic that hits 'em right between the eyes with speed, impact and mid-air acrobatics!

Card Stunts is Gregory Wilson's complete Close-up card act performed live from the Magic Castle. You'll learn how to do it all! The explanations are thorough, and the material is some of the best in the world. If you perform with a deck of cards, this is a must-have DVD.

This DVD is amazing! Report this review
Verified buyer Pro Privacy ON (login to see reviewer names) on January 5th, 2006
Just go to any magic forum and you'll see that magician's that do magic for a living say things like "this is the best tape I own!" and "This is one video I'm never going to get rid of." Now that it's out on DVD, it's a steal for 30 bucks!

This is by far one of my favorite... probably my favorite card DVD I own! I don't know what people are talking about with Greg's teaching. I thought it was excellent. The only thing he DOESN'T explain is "Double Decker" but you'll notice it's not even listed in the contents on this site or on the back of the DVD case. It's a cool trick and if you know a little bit about card magic, Greg offers you a hint on how it's done and if you go back and watch the performance, you'll easily figure it out. He gives you the ok on doing this, or if you can't, he tells you where to find the explanation of the routine.

To me though, the other tricks that were taught are absolutely incredible and with many of them, nobody has done anything like it in the past. I thought the teaching was excellent, the tricks were excellent and honestly, I was fooled by some of the stuff and I've been doing card magic for a long time. I love watching Greg perform! If you're just starting out, get Easy to master card miracles with Michael Ammar or Born to Perform with Oz Pearlman, but if you want to do some incredible card magic that you won't see a lot of other magician's doing... get this DVD it's well worth it!
6 of 8 magicians found this helpful.
Did this review help you? Do you want to respond to this review?

Tough for beginners, great for advanced Report this review
Verified buyer Pro Privacy ON (login to see reviewer names) on April 2nd, 2010
here is a DVD that is a great one to aspire to. Wilson shows some wonderful tricks, and with enough time, just about anyone could master these illusions. Sometimes, I've found that beginners have a little more time on their hands, so this would be a great video for them. If you're looking for a quick trick to learn and wip out on the fly, this is probably not for .
4 of 4 magicians found this helpful.
Did this review help you? Do you want to respond to this review?

Greg's the best Report this review
Pro Privacy ON (login to see reviewer names) on April 7th, 2010
This is one of my favorite DVDs. I really like this DVD and the routine that is performed in the beginning. Getting to watch Greg perform is an invaluable lesson in audience interaction and management. The tricks are very well-routined and thought out. You will have to practice, but the material is well within the reach of anyone who puts in the work. Joke in the box is an awesome 'card under the glass' style routine and Reset with a Hook is one that you will be performing all the time.
2 of 2 magicians found this helpful.
Did this review help you? Do you want to respond to this review?

One of my favourites. Report this review
Pro Privacy ON (login to see reviewer names) on April 3rd, 2010
This was the first magic video I ever got, I remember getting it on VHS and watching it over and over. Every effect on here is simply brilliant and you learn so, so ,so many sleights and effects which make it excellent value for money. As always Greg Wilson is funny and friendly in the explanations which make it a pleasure to learn from him.
2 of 2 magicians found this helpful.
Did this review help you? Do you want to respond to this review?

I love Gregory Wilson! Report this review
Pro Privacy ON (login to see reviewer names) on April 2nd, 2010
This guy is so good! he is funny, and he is a great card magician. There are a lot of tips in this dvd that is valuable, and a lot of great tricks, and all of them are very visual and exciting to watch. Have fun with this dvd!
2 of 2 magicians found this helpful.
Did this review help you? Do you want to respond to this review?

It's Gregory Wilson . . . duh Report this review
Verified buyer Pro Privacy ON (login to see reviewer names) on April 2nd, 2010
Gregory Wilson is a stud. I love watching him perform in front of an audience. He really knows how to have a good time and have fun with the audience, and most times it's all about having fun and less about the magic. Watching him perform is truly astonishing.

This video, Card Stunts, is loaded with good solid material. His Heavyweight boxing routine alone is worth purchasing this DVD. This is a fast-paced routine where the card box appears and vanishes and the cards end up in the box and out of the box. Super smooth, and super entertaining.

This was a Penguin Magic production, and the quality is top notch. The only major complaint I have about the product was the fact that he performed Paul Harris's effect Double Decker, but did not explain it. If you're familiar with Paul Harris and his work, you're likely familiar with this effect, but it would be nice to see his tips and pointers and his handling. I don't mind a DVD that has a performance only section if it's part of a trailer or an advertisement on the DVD. However, when it's part of the performance routine, and they don't teach it, it's a bit annoying. A lot of this material was Paul Harris-based. In fact, at least 4 effects were basically Wilson's handling of Harris effects. However, it's still worth it. Wilson brought some groovy ideas to the table.

Phoenix Split is a variation of Las Vegas Split by Paul. Also, Reset with a Hook is, of course, Paul's Reset effect. This one, I will say that I liked Wilson's handling until the end. It was a bit anti-climatic. The end was supposed to be the "big change that makes this version better," but I'm not seeing it.

Boxspring is a killer effect where the four aces "melt" through or "pop out" of the closed up card box. G Force is probably, in my opinion, the weakest link on the DVD. It's basically him forcing the same card on the same person 3 or 4 times in a row with a transpo at the end. It's all a bit confusing.

Finally, Revelation in Spades is an excellent effect. This is basically a thirteen card revelation without having cards selected. I read Marlo's ten card revelation in his book Early Marlo. I thought the revelations were beautiful; in fact I use some of them to this day. However, I didn't like the idea of having 10 cards selected and returned. The rythm and pacing of that can be a bit boring. Wilson's effect, Revelation in Spades takes the selection and return process out of the mix. This really is a thing of beauty to watch when Wilson performs it. As he points out several times in the DVD: he's a really lonely guy. It shows by how dang good he is. GEM!
2 of 2 magicians found this helpful.
Did this review help you? Do you want to respond to this review?

It's so the amazing Report this review
Pro Privacy ON (login to see reviewer names) on March 17th, 2017
Gregory Wilson will NEVER fail to amuse you. If you buy this DVD, your bound to find something that you would love and you would use.

Not only that, if you pick it up as an Open box, whhooooododo, that's a sale I won't forget.

Pick it up, it's pretty cool.

Great out of 10, would purchase Greg Wilson stuff again
2 of 3 magicians found this helpful.
Did this review help you? Do you want to respond to this review?

Get ready for heavy practice. Report this review
Pro Privacy ON (login to see reviewer names) on October 29th, 2017
Gregory Wilson has to be one of my favorite creators on penguin. Consistently putting out strong effects such as bandwith, pyrotechnic, revolution, and more. This is no different. However, this set of tricks is geared more towards the intermediate performer. If you're not familiar with different types of palms and have poor crowd management, get ready for some practice. The boomerang card shot, although not easy, is my favorite out of all the tricks on this disc. Overall, card stunts brings a fairly strong routine/arsenal of tricks to the table, but is also a good lesson in misdirection by Wilson as well.
1 of 1 magicians found this helpful.
Did this review help you? Do you want to respond to this review?

Gregory Wilson - Card Stunts = Lazy Report this review
Pro Privacy ON (login to see reviewer names) on August 26th, 2006
I think the reviews on this site have been a little too forgiving to Greg Wilson.

I am an experienced working magician and can do all of the tricks on this dvd except 'boomerang card of death'. The only reason I can do all the tricks though is because I was familiar with most of the moves/sleights anyway. The problem I've got with this dvd is if I spend £20 on a teaching dvd I expect it to include in depth explanations not just a quick explanation and then move on. This is the first dvd I have bought of Greg Wilsons and I would hesitate to buy another because of this. A great example of giving an in depth explanation is Daniel Garcia's 'Torn'. If any of you own that dvd you will know what I mean.
I've given card stunts 3 stars because even though the explanations are poor the tricks he is performing are very good. This could have been a great dvd if Greg hadn't been so lazy.

I would recommend this dvd only to people who are experienced enough to already know the sleights on this dvd as I would hate to learn any of the moves from scratch from here.
7 of 14 magicians found this helpful.
Did this review help you? Do you want to respond to this review?

Worth it for the performance alone Report this review
Pro Privacy ON (login to see reviewer names) on April 23rd, 2020
Greg is a great teacher and even better magician. If you're looking to pick up some effects that you can add into a professional repertoire pick this up. These effects take some practice, but are well explained.
Did this review help you? Do you want to respond to this review?
Load more reviews
Bestsellers