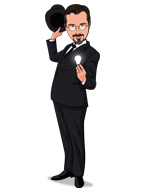 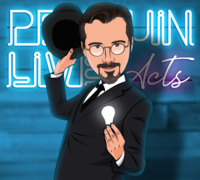 Today, when you order "Larry Hass LIVE ACT", you'll instantly be emailed a Penguin Magic gift certificate. You can spend it on anything you like at Penguin, just like cash. Just complete your order as normal, and within seconds you'll get an email with your gift certificate.

"Larry Hass is an inspiring teacher and a joyful man to know." – Teller

"Thank you, Larry, for doing so much to help raise the intellectual level of our beloved Art of Magic!" - Juan Tamariz

"With the publication of Inspirations he has made a significant and long-lasting contribution to our art. This required reading for the serious student, amateur, and professional." - Lance Burton

"Larry Hass has personally helped me become a better magician and a deeper thinker.” - Jeff McBride

"Larry Hass is not only a fantastic performer who puts meaning and love into the magic he performs, he’s also a lovely human being, which shines through and endears him to his audiences." - Suzanne

"Larry Hass has become the contemporary Henning Nelms. Inspirations is every bit as essential to today's thinking performers as Nelms's Magic and Showmanship was generations ago." - Ross Johnson

"Inspirations is a beguiling and thoughtful collection of essays and routines from one of magic's progressive practitioners." - Rob Zabrecky

This Act is a formal close-up show—it would play at a a private party, restaurant, or nightclub where people are seated theater style with the close-up table up front.

Opening Surprise – An impressive way to grab their attention.

Something from Nothing – Finally on video, Larry transforms a blank piece of paper to a $10 bill . . . and then gives the audience a magical surprise.

Not Cutting the Aces – Learn how to "dead cut" to a four of a kind selected by a participant. (Based on a final routine by Eugene Burger.)

Imagination Card Across – One merely thought-of card travels from one packet to another. A super-clean classic with no palming.

Skin in the Game – a mindreading game with ESP cards, where real poker chips are at stake!

Larry Hass, Ph.D. is the Dean of McBride’s Magic & Mystery School in Las Vegas, and former Professor of Philosophy and Theater Arts at Muhlenberg College. In 2010, he retired from college teaching to become a full-time performer, teacher, writer, and publisher of magic.

Larry Hass creates magic shows that mix astonishing magic with ideas that lift the spirit. He has performed in over a dozen countries at theaters, nightclubs, restaurants, universities, public conferences, and corporate events all across America and internationally.

Dr. Hass has won multiple awards both as a writer and as an inspirational teacher of magic. He is the author of several highly acclaimed books for magicians, including Life Magic, Inspirations, Transformations, and Teaching Magic (with Eugene Burger).

Larry Hass's visionary approach to magic as an art form has been featured in leading international media, including the New York Times, USAToday, on National Public Radio and the Discovery Channel, and in his recent TEDx Talk.

Purchase this product and on May 12th anytime after 12:00pm Eastern, click the MyPenguinMagic area at the top of the Penguin site. You'll see the "learn" button appear next to this lecture.

A CLASS ACT! Report this review
Verified buyer Pro Privacy ON (login to see reviewer names) on May 13th, 2019
I wanted to pass along my observations regarding an "educational" experience I recently had.
I was given an opportunity to watch a person perform and teach magic with not only its parts and mechanics, but most important, all of the mortar and nuances that shape and create each part of his show.
The secrets were always the LEAST important factor. Some of the most important things discussed were the "why's" not the "how's," blocking, (regardless of it being a close-up show), all the good words needed; selection of assistants; routine philosophy; creative thought process; crediting the creators; and much more.

One "striking factor" was the magician's appearance. I saw no t-shirts, jeans, baggy pants, sweatshirts, stocking-caps, tattoos, piercings, bad hair style, dirty finger nails, (on him anyway); no vernacular, or silly costume in bad taste.
He certainly was the best dressed person in that studio!
This guy was in a 3 piece suit! He was well-groomed, spoke clearly and distinctly, was pleasant and respectful to his audience! He actually looked like a magician! What an anomaly!!!
You must understand, for a long time, I've been trying to come up with what a magician, in this society and culture,
should look like. Now I have the right picture and idea!
His name...Larry Hass.
So, STUDENTS OF MAGIC TAKE NOTE! THIS IS ONE GENTLEMAN THAT "SETS A PERFECT EXAMPLE for us all!"
4 of 4 magicians found this helpful.
Did this review help you? 1 comment

Larry Has Live Report this review
Verified buyer Pro Privacy ON (login to see reviewer names) on May 14th, 2019
This a great teaching from one of the best teacher and magician
I always enjoyed his teaching and so many minor details he gives so we do not fail
much all

Thanks larry
2 of 2 magicians found this helpful.
Did this review help you? Do you want to respond to this review?

Get Inspired and Transform Report this review
Verified buyer Pro Privacy ON (login to see reviewer names) on May 15th, 2019
As a play on the titles of Dr.Larry's two books ,I have to tell all ya all that like those books, this lecture continues his meticulous and thoughtful approach to presenting a magical performance in a more engaging way with scripting and philosophy.. Dont just buy this video and consider yourself good to go... you will be doing a dis-service to yourself and the art.. Sure, you can get this vid because it is an act that you can copy.. but WHY.. understand why larry structured it like this.. also.. search out and purchase his two tomes.. Inspirations, and..... Transformations... you should have them as THE trifecta to make you a better performer..
2 of 3 magicians found this helpful.
Did this review help you? Do you want to respond to this review?

Dr. Hass gives meaning to magic! Report this review
Verified buyer Pro Privacy ON (login to see reviewer names) on May 14th, 2019
Once again Larry Hass gives us a great lecture. Do yourself a favor and watch this! Dr. Hass is a master of presentation and performance. He is also extremely creative at finding deeper and more deceptive methods for magic effects. This live act and lecture is a masterclass in magic! Because Dr. Hass is a philosopher, he teaches us all how to add more meaning to our magic!
2 of 3 magicians found this helpful.
Did this review help you? Do you want to respond to this review?

Thoughtful performance and teaching Report this review
Verified buyer Pro Privacy ON (login to see reviewer names) on June 1st, 2019
First, let me say that I was new to the concept of "Live Act". This is just great. I've always wanted to see a complete show and then have it discussed. So this really is a great idea and much better than a lot of the trick - explanation standard you get to see in lectures. Mr. Hass does a great job of explaining the set-up of his pieces, the individual tricks and the hows and whys of performing them the way he does. It's delightful and entertaining to watch and learn from him. And Dan Harlan is a great host as always. In fact, during the explanation of the ESP card trick, he gives an alternative handling that is simply wonderful and excited even Mr. Hass. Highly recommended.
1 of 1 magicians found this helpful.
Did this review help you? Do you want to respond to this review?

Totally inspiring! Report this review
Verified buyer Pro Privacy ON (login to see reviewer names) on May 20th, 2019
This is amongst the very best Penguin lectures I’ve seen. Already on my third viewing. More than methods! It is full of outstanding ideas to elevate the art of performing magic. Totally inspiring!
1 of 1 magicians found this helpful.
Did this review help you? Do you want to respond to this review?

Can't Wait Report this review
Pro Privacy ON (login to see reviewer names) on May 7th, 2019
If it's Larry Hass - it will be a powerful, dynamic and thoughtful set of routines that will pack a punch. Larry is one of the best teachers and I am proud to call him friend. Bravo Larry!
2 of 4 magicians found this helpful.
Did this review help you? Do you want to respond to this review?

Strong effects and great advice Report this review
Verified buyer Pro Privacy ON (login to see reviewer names) on May 14th, 2019
There is so much to enjoy about Larry’s live act. Firstly the pieces of magic he teaches are solid workers with strong impact and deceptive methods. Opening surprise is as practical a production of a glass of liquid as you will find and ‘not cutting the aces’ gives the impression of great skill but with a dependable method you will love. The real gold though comes in all the teaching on act construction and routining, this is the stuff not often found in books or downloads but here in abundance. Highly recommended!
1 of 2 magicians found this helpful.
Did this review help you? Do you want to respond to this review?

Excellent! Report this review
Verified buyer Pro Privacy ON (login to see reviewer names) on December 30th, 2021
The material is great...but, even better than that are the principles and advice on structuring and presenting your show. The things taught in this live act go far beyond the effects taught and will help you become a more polished performer when it comes to any material you choose! Best lecture in this Live Act series by far.
Did this review help you? Do you want to respond to this review?

Magic by krishan Report this review
Verified buyer Pro Privacy ON (login to see reviewer names) on December 18th, 2019
I love his calmness in teaching His scripts are awesome and I am putting in my shows

Thanks larry
Did this review help you? Do you want to respond to this review?
Bestsellers