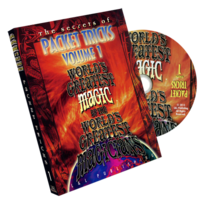 Today, when you order "The Secrets of Packet Tricks (World's Greatest Magic) Vol. 1", you'll instantly be emailed a Penguin Magic gift certificate. You can spend it on anything you like at Penguin, just like cash. Just complete your order as normal, and within seconds you'll get an email with your gift certificate.

It seems to be commonly believed that the genre of card magic known as packet tricks - that is, card tricks that use a small number of cards rather than the entire deck - are a relatively recent invention in the history of conjuring but this is not the case. While it's true that packet tricks became insanely popular in the magic community of the 1960s and 70s (Jon Racherbaumer even coined the word "packeteer" to describe magicians who specialized in these types of tricks), effects with a small number of cards date back to the late 1800s. Though many use the term "packet trick" disparagingly, the truth is that, if well-conceived and performed, they can often be more astounding than effects performed with an entire deck of cards. Don't underestimate the power of the packet! Armed with just a small bunch of cards and the wisdom gleaned from the masters on this DVD, you'll be a "packeteer" in no time!

On Volume 1, you'll meet a number of magicians performing and explaining small-packet card magic that any close-up performer would be proud to add to their repertoire. Larry Jennings starts with a trick that uses only three cards yet produces a remarkable visual illusion of one of the cards melting effortlessly through the other two. Martin Nash follows with a four-card trick where two Queens and two Jacks turn into four Queens and then four Jacks - that is, until they finally change into four Aces! Then, Michael Close shows off four blue-backed Jokers that turn red-backed one at a time and then instantly return to their original blue-backed condition while Michael Ammar performs and teaches a brilliant swindle with three blank-faced cards and an Ace - or so it appears. Next, the legendary Alex Elmsley offers a demonstration of the trick (and the sleight) that arguably started the modern packet trick era while Bill Malone twists some Aces and then turns them into something totally different. John Guastaferro combines two wonderful effects that combine the best features of the Hofzinser Four-Ace Problem and Paul Harris' Reset while Darwin Ortiz rounds out the volume with his version of Peter Kane's classic Ace transposition trick.

A+ entertainment with juts a few cards! Report this review
Pro Privacy ON (login to see reviewer names) on July 13th, 2013
That's what packet tricks are. It can make the magic more exciting because they clearly see you only have a few cards. The tricks on these 3 L&L DVD's are some of the best ever!
Did this review help you? Do you want to respond to this review?
Bestsellers