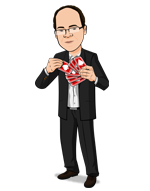 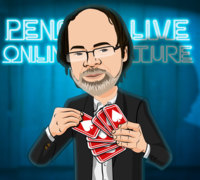 Today, when you order "Bebel LIVE", you'll instantly be emailed a Penguin Magic gift certificate. You can spend it on anything you like at Penguin, just like cash. Just complete your order as normal, and within seconds you'll get an email with your gift certificate.

Bebel is an underground legend who produces some of the most stunning effects possible with cards. Honed on the streets of Paris, and shared for the first time here, Bebel gives you the full work on some of his stand out card magic. In addition to the effects, Bebel shares his performance theory as well as a discussion of improvisation within an act and within a trick. This lecture won't just transform your magic, it will transform you.

1. Bento Sandwich- What begins as a sandwich effect then becomes an Everywhere and Nowhere with jokers and a selected card effortlessly transforming. The effect concludes with a surprise card to pocket and transposition of two jokers and the selected card.

2. Mabillon - The only way to describe this is a reverse six card repeat that you have to see to believe.

3. Le Tour du Père Noël - The cards come alive as the red aces change to the black aces then change again and yet again, then become the queens.

4. Big Bang - To say that this effect is simply the four aces visually change on the table into the four queens is to not do it the proper justice it deserves. This extremely visual transformation is taught in both a simple and complex version that are both the kind of eye candy Bebel is known for.

5. Take my heart transposition - An almost prediction effect where the suits of cards change places to match a thought of card that changes under the spectator’s hand. One of the most simple effects taught in the lecture is also one of the most elegant.

Bébel is already a legend in card magic.  He is an underground street performer in Paris, France where half the world is walking around. In an age where technological miracles make anything possible, it's amazing to be able to astonish, amaze, and surprise with 52 pieces of cardboard which are as old as time. It's incredible”. Bébel sets up under a large street lamp performing daily. He has been doing this since 1989.

- 1988 first prize in card magic at the AFAP (French Association of Conjuring Artists) magic convention;
- 1995 first prize, the &quot;Golden Dove&quot; award at Juan les Pins.
- His card magic can be seen at cabaret tables, in conference rooms across the world, in Achille Tonic’s productions with Shirley and Dino, and on TV shows such as “Null par Ailleurs” on the channel Canal + and “Vivement dimanche” presented by Michel Drucker.

Purchase this product and on July 28th anytime after 12:00pm Eastern, click the MyPenguinMagic area at the top of the Penguin site. You'll see the "learn" button appear next to this lecture.

wonderful stuff Report this review
Verified buyer Pro Privacy ON (login to see reviewer names) on August 4th, 2019
This is wonderful. Not so easy, I spent almost 15 hours of training just for the first trick Bebel shows. It is not an easy work you got here, but pure sleight of hand is not easy. As Erdnase says: "[I]f feats at card-handling could be attained for the asking there would be little in
such performance to interest or profit any one."
This session is full of deception, subtleties and otherwise not so hard to learn card handling. You will learn a lot about misdirection. I love how Brits are working with misdirection, but it was Bebel who showed me how to understand what classics like Showmanship for conjurers, Our art, etc. says about misdirection.
This session should be a must for serious learner. But I might be too overrating, as I am excited from showed quality.
So, if sleight of hand (not just move monkey, but sleight of hand conjurer) is yours glass of wine: DO NOT HESITATE! I felt in love of Bebel's art. Next trip - Paris!:D
5 of 6 magicians found this helpful.
Did this review help you? Do you want to respond to this review?

Very best Report this review
Verified buyer Pro Privacy ON (login to see reviewer names) on July 29th, 2019
This is great art, congratulations. The routines are very neat and no detail is left out in the execution. There is a constant search for originality, as in Mabillon, while referring to the classics, such as Marlo. The "3 Card Monte" really adds value to the many existing versions. It highlights, in particular, a "switch" to the reversal of two cards, developed by Daryl. The only regret is that these two routines are already available in the "Inspiration" DVDs, previously released.
4 of 4 magicians found this helpful.
Did this review help you? Do you want to respond to this review?

One of the best Report this review
Verified buyer Pro Privacy ON (login to see reviewer names) on July 31st, 2019
After watching the Bebel lecture I proceeded to Practice for an unhealthy leangth of time. I haven't been this inspired in years. I say this because this type of artist is rare, a real magician, a true master.
2 of 3 magicians found this helpful.
Did this review help you? Do you want to respond to this review?

Extraordinary!! Report this review
Verified buyer Pro Privacy ON (login to see reviewer names) on June 1st, 2020
Bebel’s sleight of hand Work is amazing....
Did this review help you? Do you want to respond to this review?

Great Report this review
Verified buyer Pro Privacy ON (login to see reviewer names) on February 27th, 2020
Buy
Did this review help you? Do you want to respond to this review?

This is a good lecture Report this review
Verified buyer Pro Privacy ON (login to see reviewer names) on December 6th, 2019
I must say that it was a little hard to watch it because the translation inbetween but it is a lecture from a true master. I picked a lot material from this lecture.
Did this review help you? Do you want to respond to this review?

Thanks Bebel
1 of 4 magicians found this helpful.
Did this review help you? Do you want to respond to this review?
Bestsellers