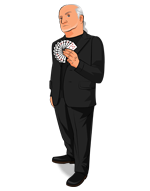 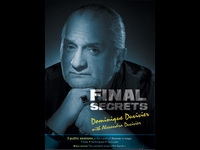 Today, when you order "Final Secrets by Dominique Duvivier", you'll instantly be emailed a Penguin Magic gift certificate. You can spend it on anything you like at Penguin, just like cash. Just complete your order as normal, and within seconds you'll get an email with your gift certificate.

Brand new material from legendary French magic star Dominique Duvivier with Alexandra Duvivier.
When you hear these two names you know that I am talking about performers making a fine living performing.
Material that is tested and honed over and over again in front of live audiences at his magic theatre “Le Double Font” in Paris and other performances in front of paying customers.
Over 9 1/2 hours of professional material!

The material covers magic with cards, coins and many other objects, you will learn routines, concepts, techniques and also experience the complete one man show “Pure Sugar”

As you watch “Final Secrets” you see a true master at work.
Dominique and Alexandra Duvivier in their prime provide you with a total immersion into their world of thinking.
The project was compiled over the duration of three years and has now culminated into this outstanding release.

“I would never have believed it; I’ve not seen him give so much of himself: apart from his tricks, Dominique talks about himself, gives you the ‘why?’ of his ‘how’.
If you don’t like him, you’re going to hate him: if you like him, you’ll love him: this peak into his brain will teach you so much about the complexities, the twists and turns of his thoughts.
Dominique reinvents his language, just like his magic; doesn’t waste time on verbs or conjugations, as he uses his most extravagant methods in open full sight; where nothing is seen, so that when you believe in it everything becomes possible.
He still has to be himself, and that is neither earned, nor easy, nor perhaps even desirable.
There’s only ONE Goshman, ONE Slydini, ONE Vernon, ONE of all of those masters, who have taught us so much by confiding in us, but knowing how to remain themselves.
Dominique has certainly risen to those heights, but don’t attempt to copy him; take in the secrets, the know-how, which he shares here.
Ever since I’ve known him, Dominique has been constantly developing, with the desire to improve things, always to be productive, which commands admiration.
He tells us here, quietly, that we should see this set as his last lecture; that he wants to move on to other things.
To what? I don’t know; but I’m not worried. This man has as many resources and pockets full of ideas!”
Gaetan Bloom

9 1/2 hours of first rate material. Languages (English & French).
Not subtitled but actually dubbed in English for ease of learning.