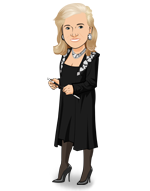 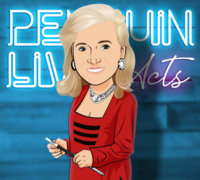 Today, when you order "Fay Presto LIVE ACT", you'll instantly be emailed a Penguin Magic gift certificate. You can spend it on anything you like at Penguin, just like cash. Just complete your order as normal, and within seconds you'll get an email with your gift certificate.

"If you’re in a restaurant and a magician approaches the table, you had better hope it’s Fay Presto. She’s the best there is!"– John Lenehan

"There's more real information about magic and performance... than in the reams of stuff all the academics, theoreticians, and armchair magicians have put out in the last fifty years."- Teller

In this Penguin Act, Fay will teach you the material that she has used to make a living with, performing for some of the most prestigious and important audiences throughout her illustrious career. You will get invaluable insight into turning tricks into magic. You will see what years of experience brings to your magic.

Fay Presto is arguably Britain's premier close-up magician. Voted The Magic Circle Close-up Magician of the Year 2012 and a former Tatler 'Party Entertainer of the Year' Fay has been personally requested to entertain HM The Queen on no less than six occasions, as well as performing for every other senior member of the Royal family. A Gold Star Member of The Inner Magic Circle, her powerful personality-based magic and ability to connect with an audience has set a standard within the magic industry.

The '40 Minutes' documentary 'Illusions of Grandeur' showing Fay in all aspects of her home and professional life, produced the most positive response that the BBC has ever had from the public and is considered one of the best ever in the series. It has been repeated twice and shown everywhere from Europe to Australia.

Purchase this product and on August 18th anytime after 12:00pm Eastern, click the MyPenguinMagic area at the top of the Penguin site. You'll see the "learn" button appear next to this lecture.

Don't Miss Fay Presto Report this review
Pro Privacy ON (login to see reviewer names) on August 29th, 2019
If you are not familiar with Fay Presto you should be. A couple of years ago, I was fortunate enough to see her lecture in front of a packed house at the Blackpool Magic Convention.  As I watched, I realized here was a person teaching magic who understood every nuance of, every movement, every potential problem.  She had LIVED with this magic. She had performed it thousands of times for the most prestigious audiences in London and throughout Europe. As Fay finished her lecture, the crowd of magicians gave her a much deserved standing ovation. I knew right there I wanted to bring Fay to Penguin Magic and have her share her insight with our customers. The magic you will learn is not the new toy. This is strong material Fay has made a great living with. But what's more important than the magic tricks is the insight she shares. It's an amazing example of really understanding your craft.  If you get to London, do yourself a favor and try to see Fay perform live at one of the high-end establishments she works at.  In the interim, do yourself a favor and watch her Penguin Live Act.
3 of 3 magicians found this helpful.
Did this review help you? Do you want to respond to this review?

Terrific! Report this review
Verified buyer Pro Privacy ON (login to see reviewer names) on September 3rd, 2019
She is an accomplished Magician and Entertainer.
It was a pleasure watching here.

I'm also impressed with Penguin because, being TS myself, they don't discriminate a person due to a person's self identity. It was a pleasure to see another, and really professional, TS Magician.

Thank you Fay and Penguin.
3 of 4 magicians found this helpful.
Did this review help you? Do you want to respond to this review?

A Super Trouper Report this review
Verified buyer Pro Privacy ON (login to see reviewer names) on November 15th, 2019
Fay Presto is one of a kind, yet she is a fountainhead of practical information that any magician can use.

I had pretty much given up magic since my fingers went numb, possibly from diabetes. Watching her work with what appeared to be a slight tremor (I could be imagining things) has inspired me to at least try to put an act together. I'm 73 so I'm free of any pressure. It's her gumption, her can-do attitude, that inspires me the most. But her little handling tips for the tricks she does are also more than worth the price of admission.
1 of 1 magicians found this helpful.
Did this review help you? Do you want to respond to this review?

Visual, practical and fun. Report this review
Verified buyer Pro Privacy ON (login to see reviewer names) on August 22nd, 2019
Probably the most practical lecture I have seen.
There are no fillers. Everything is good enougt to use.
Lot off interaction.
1 of 1 magicians found this helpful.
Did this review help you? Do you want to respond to this review?

Lessons from the trenches Report this review
Pro Privacy ON (login to see reviewer names) on August 21st, 2019
Fay Presto has been the UK's number 1 restaurant magician for decades and this lecture distils her working set. And this material has been worked over thousands of performances (she has approached over 100 thousand tables in her time by her estimation). The lecture is loaded with tips for workers on transporting and storing props, pocket management and dozens of other things that can only be learnt over a long career in the trenches.
1 of 1 magicians found this helpful.
Did this review help you? Do you want to respond to this review?

Good Ideas Report this review
Verified buyer Pro Privacy ON (login to see reviewer names) on August 22nd, 2019
A lot of information, ideas, tips from real pro.
Did this review help you? Do you want to respond to this review?

Fay Presto is a consumate pro since... a lot of years!

There is gold into these classical routines. Tips and bits of business, all made for real world close-up.

Highly recommended for any pro !