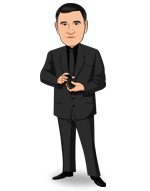 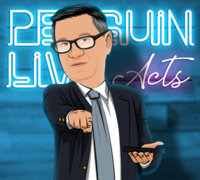 Today, when you order "Lior Manor LIVE ACT", you'll instantly be emailed a Penguin Magic gift certificate. You can spend it on anything you like at Penguin, just like cash. Just complete your order as normal, and within seconds you'll get an email with your gift certificate.

"Lior Manor may not be well known in the magic world, but that's because he's too busy flying around the world (always in First Class) doing shows for major corporations. He is known, however, to the elite of the magic and mentalism world. I have been to several of his lectures and, often, most of the attendees are other leading professionals. They come because they know Lior shares workable, money-making ideas that have been proven in the real world. He teaches the way he performs – with passion and with great humor. He's not to be missed!”"–Ken Weber

"A creative mind, a master mentalist, a wonderful humor. He is the genuine deal. He is loved and amazes internationally. Now you can find out why. International star power, a league of his own, and so funny."” – Marc Salem

"Lior is and has been one of the driving forces in mentalism for over three decades. His is also a master trade show performer, MC and perhaps the best product promotion experts in magic. I have a prediction…his lecture will change your life!" – Bob Kohler

"Lior is a pioneer mentalist with tons of ideas in his back pocket. He always shares valuable materials that were proven to memorize the audience. I grew up watching his TV shows in Israel and it inspired me. This is a rare explanation video of a rare performer!" -Yigal Mesika

"Lior Manor is one of the busiest working mentalists I know and his magic and mentalism is designed to amaze and entertain people in the real world. You will enjoy his work!" -Asi Wind

In depth discussions on Theory, effects and routines;  Pre Show work, Invisible Touches, moving glasses how to get work in the corporate world and  flying in seat 1A.  And much more food for thought for the professional magician/mentalist.

Lior Manor has been a professional mentalist for the past 30 years. In the real world, he is known as an artist who specializes in transferring information in an entertaining manner. An Infotainer.

Lior is a leader in moderating hi-tech conferences and product launches for leading companies all around the globe, including HP, IBM, Checkpoint, Abbot, MSD, Applied Materials, and many others. They choose him for his knowledge and expertise and how to tie their company messages into his effects to convey that information in the most effective way.

Lior also does a straight mentalism act with both classics and modern mentalism.

Lior’s inventions in the magic/mentalism world include “The Invisible Touch”, “The Mobile Opener” “The Big Trivia Game”, “Talk To The Screen”, and many others. These amazing effects are featured by leading professionals around the world.

Since 1997, Lior flies almost every 2 weeks somewhere around the globe. He is also known for his second name: “1A all the way”, which happens to always be his seat on the airplane.

Purchase this product and on September 22nd anytime after 12:00pm Eastern, click the MyPenguinMagic area at the top of the Penguin site. You'll see the "learn" button appear next to this lecture.

Great stuff! Report this review
Verified buyer Pro Privacy ON (login to see reviewer names) on September 23rd, 2019
As usual, Lior is a pro with tons of ideas and experience. I LOVED the idea of the juggling balls and the use of the frixtion pen. So many inside ideas about how to promote yourself and how to make yourself get more perks while working.

Also really liked the idea of using all those rings to make a final choice.

Fabulous thinking and routining.
2 of 2 magicians found this helpful.
Did this review help you? 2 comments

Buy now!!! Report this review
Verified buyer Pro Privacy ON (login to see reviewer names) on September 24th, 2019
Where should I start?
This live act shows you a different style of mentalism, it is not the very posh style of mind-benders such as Derren Brown, where everything happens for a reason and every word has a meaning, it about a guy, and to quote Lior himself " dressed like a banker", a guy who knows stuff about you and they come up in an apparent random order ...
in the middle of a which hand routine, he reveals personal information, and crazy stuff happens.

Lior plays the fine lines of pre-show work, dual reality and comedy mentalism, it is watching a master at work.
The business tips are worth thousands of dollars as they are even without the superb routines taught within.

The method matters only if the audience is aware of it, this is not conditions mentalism like the Marc Paul live act ( also highly recommended ) but a completely different approach.

You will learn how to read minds, do a which hand effect and play everything as big as possible!

Lior at his best Report this review
Verified buyer Pro Privacy ON (login to see reviewer names) on September 24th, 2019
This why he always travels in search 1A - he's worth it! Lior Manor's new download teaches about routining, his personality, dealing with things that go wrong, and more! While you might not learn anything new, how it's all put together makes it a keeper. Great download!
1 of 2 magicians found this helpful.
Did this review help you? Do you want to respond to this review?

Wasn’t what I was hoping for Report this review
Verified buyer Pro Privacy ON (login to see reviewer names) on November 15th, 2019
There is a lot left to be desired with this lecture. There are some interesting things shared, but overall I was disappointed in the presentation.
Did this review help you? Do you want to respond to this review?

weak performance Report this review
Verified buyer Pro Privacy ON (login to see reviewer names) on October 21st, 2019
I saw lior live and know loads of his work. He is a good performer and an even better businesses man. but here he is somehow a mess. fuzzy, lacks concentration, even forgets his climaxes and setups. the Himber routine is a joke. the bally prediction is great, on the other hand.
his explanations and the interview next day is much better than the show.
Did this review help you? 1 comment

Brilliant Report this review
Verified buyer Pro Privacy ON (login to see reviewer names) on October 11th, 2019
The advice on this dvd was the best, I think that this is a great dvd and he is really funny, 5 stars all the way
Did this review help you? Do you want to respond to this review?

Another Home Run! Report this review
Pro Privacy ON (login to see reviewer names) on October 3rd, 2019
Once again, Lior Manor knocks it out of the park in his latest Penguin Act. Sound, practical advice from a professional who walks the walk. His advice on pre-show and his reasoning behind thinking like a mentalist, not like a magician is worth the price of admission. Solid routines that you will add to your show.
Did this review help you? Do you want to respond to this review?

PURE GOLD Report this review
Verified buyer Pro Privacy ON (login to see reviewer names) on September 26th, 2019
The Juggling add a number is very practical routine.The Himber Ring Routine, muscle reading you will use it.
A lot of information, ideas, tips.