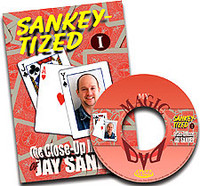 Today, when you order "Sankey-Tized Volume 1", you'll instantly be emailed a Penguin Magic gift certificate. You can spend it on anything you like at Penguin, just like cash. Just complete your order as normal, and within seconds you'll get an email with your gift certificate.

Jay Sankey has created some of the worlds most inventive close-up magic. This DVD features many routines using ordinary objects like cards, coins, keys, rings, spoons and more. He employs simple methods to render his effects entertaining and magical. As an added bonus you get to see Sankey being Sankey as his warped sense of humor, that he developed as a stand-up comedian, shines throughout with some gags and fake routines.