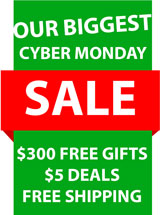 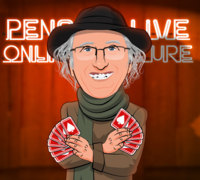 Today, when you order "Juan Tamariz LIVE 2", you'll instantly be emailed a Penguin Magic gift certificate. You can spend it on anything you like at Penguin, just like cash. Just complete your order as normal, and within seconds you'll get an email with your gift certificate.

Considered by many to be the greatest magician alive, Juan's new collection of magic includes never-before-seen miracles. DOWNLOAD THE FULL LECTURE TODAY.

"Tamariz's theory eliminates all possible solutions, leading the audience across the rainbow into WONDERLAND." -Roberto Giobbi

"He's fooled me worse, AND more times than any magician on the planet." -Rick Lax

"Juan Tamariz is the Leonardo Da Vinci of our time." -Christian Engblom

Juan Tamariz shows you how he makes card magic play big in his full, stand-up performance filmed at the prestigious Magic Circle in London.

Thought of Card- A single card is placed aside as a prediction. Someone from the audience names any card. When his prediction is shown, it proves to be correct!

Thought of Cards Across- Two thought-of cards invisibly travel from one packet to another using a clever new combination of methods that will fool you.

Two Thought Cards- A spectator helps choose someone in the audience to name any card, which his helper removes from his back pocket. This card then changes into another one she's merely been thinking of while it's held in her hand... but only for a moment as it returns to its original form.

Phone Trick- Juan figures out what card someone on the other end of a phone call is thinking.

A celebrity of television and stage in Spain and South America, JUAN TAMARIZ is known internationally among magicians as a true master of his art, and one who generously shares his time and knowledge, both in print and in person, with the magic community. He is the author of three critically acclaimed best-selling books in English: The Five Points of Magic, The Magic Way and Sonata. Along with Arturo de Ascanio, Tamariz has spearheaded a school of thought in close-up magic that has produced FISM award-winning champions and deeply influenced the craft of magic worldwide.

Purchase this product and on September 29th anytime after 12:00pm Eastern, click the MyPenguinMagic area at the top of the Penguin site. You'll see the "learn" button appear next to this lecture.

Very good but . . . . Report this review
Verified buyer Pro Privacy ON (login to see reviewer names) on October 4th, 2019
I'm not an experienced magician, and for me, while being very nice effects, they are all too difficult for me to do, so I'm obviously somewhat disappointed. A lot of what's necessary to do them was, in my opinion, covered very minimally, and also quite difficult to understand.
4 of 7 magicians found this helpful.
Did this review help you? Do you want to respond to this review?

Still one of the greatest Report this review
Verified buyer Pro Privacy ON (login to see reviewer names) on October 16th, 2019
It's nice to see him perform a whole act. he has become a little calmer but his magic is still great. i realy recommend this lecture.
1 of 1 magicians found this helpful.
Did this review help you? Do you want to respond to this review?

A Masterful Performance of Decent Illusions Report this review
Verified buyer Pro Privacy ON (login to see reviewer names) on October 3rd, 2019
I bought his lecture to see Juan Tamariz in actual performance. While I have read a lot of what he has written, I had never before seen him perform. It was worth the $40 fee to see this Spanish Card Master as work. He did not disappoint.

The value of this lecture for me was in how Tamariz takes some tricks using a memorized deck and turns them into a performance that entertains a crowd composed of magicians and laymen. His joy is palpable and his delivery the result of a lifetime of performing.

The tricks in this lecture can all be found in his books (including the three coincidences trick that was not taught). Honestly, these are not even close to his best material. They are decent, but there are much better ones in Tamariz' arsenal. Even the bonus tricks were not the best (or easiest) tricks for close up card magic. That being said, from a layperson's perspective, these tricks are about as impossible as they come.

For those who are already familiar with memorized deck work, this lecture will provide some valuable insights regarding timing, performance, humor, body posture, motivation, and audience management. And Tamariz always has some intelligent twists on classic concepts.

For those who are newer to magic, this lecture will probably be fairly frustrating. The one star deduction serves as a warning for the beginner. There are a lot of complicated concepts that are not explained in much detail, if at all. In this lecture Tamariz mentions faro shuffles (in faros and out faros), double lifts, controlled glimpses, and the Tamariz Perpendicular Control without much explanation. For a beginner unfamiliar with these concepts, this can be very discouraging and disappointing. Tamariz is talking as a professional magician to professional magicians.

Also, this lecture is not for those wanting to learn a memorized deck. It is for those who want to learn tricks with a memorized stack. Tamariz does not teach his stack. If you want to learn Mnemonica, buy the book. (By the way, in his book Mnemonica Tamariz does teach everything in detail which he leaves out in this lecture.)
2 of 4 magicians found this helpful.
Did this review help you? Do you want to respond to this review?

Tamariz lecture Report this review
Verified buyer Pro Privacy ON (login to see reviewer names) on October 3rd, 2019
Excellent lecture as usually...For me it is the first time that Juan explains his false shuffle by putting a deck with up-joged cards in the box. It is a gem for those who enjoy memorized deck work. I have some regret that he did not explain his longest routine of coincidence but those who are familiar with the Smith myth principle would be able to reconstruct it. It is always a pleasure to see such an energetic and skillful magician
1 of 2 magicians found this helpful.
Did this review help you? Do you want to respond to this review?

Juan Tamariz Live Report this review
Verified buyer Pro Privacy ON (login to see reviewer names) on October 2nd, 2019
Juan Tamariz is a true master. Owners of his book "The Magic Rainbow" and his latest DVD collection will especially benefit from this lecture. I would definitely recommend this download.
1 of 2 magicians found this helpful.
Did this review help you? Do you want to respond to this review?

Tamariz's inspires Report this review
Verified buyer Pro Privacy ON (login to see reviewer names) on October 1st, 2019
I loved this lecture. I found a lot I could take away. It was worth the investment. The only reason I did not give it 5 starts was the video quality was not as clear and crisp as most of the live lectures are. Still it was good enough to see and understand what was happening. I recommend this video lecture.
Did this review help you? Do you want to respond to this review?
Bestsellers