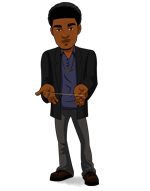 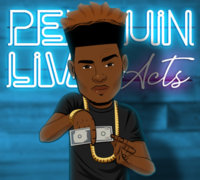 Today, when you order "Jibrizy LIVE ACT", you'll instantly be emailed a Penguin Magic gift certificate. You can spend it on anything you like at Penguin, just like cash. Just complete your order as normal, and within seconds you'll get an email with your gift certificate.

The MAXIMUM ACT: A 25 Minute Act that uses mostly borrowed items and is suitable for all professional performances.

Vanishing Bottle- You will see how I am able to get the most I can out of this classic prop and how you can make this routine not only hilarious but also extremely impressive.

Ring Magic- A borrowed ring changes places with a ring in my pocket under impossible conditions. You finish the routine by making their ring disappear and it is gone forever... Or is it???

Phone Magic- An effect with a borrowed phone that I use all of the time. Not only do you read their mind to reveal their secret PIN number but you reveal their phone number and give them a call. This is an effect that uses no gimmick and it plays big for even large audiences.

Impromptu Card Routine- Some super practical card magic that requires no table and can be appreciated by a large audience. Finishes with an entire deck of cards turning into skittles.

Ring Finale(Performance Only) - The ring that was borrowed earlier is not in my pocket like everyone thinks. Instead, it is found in an impossible place that no one could have possibly predicted.

Jibrizy, The Hip-Hop Illusionist, is an award-winning magician from Penn & Teller: Fool Us. He is the youngest magician to win on the show. Jibrizy is well known throughout the Chicago area where he frequently captures footage for his web-series “Limitless.” Jibrizy has gained over 30,000,000 views on his YouTube videos. He began practicing magic at the age of 9 and started his YouTube channel 5 years later at age 14. Since then, he has grown into an online magic superstar. Jibrizy is also a magician for the Chicago Bulls. You can catch Jibrizy doing magic before the game or at the half-time event at the United Center.

Purchase this product and on October 6th anytime after 12:00 pm Eastern, click the MyPenguinMagic area at the top of the Penguin site. You'll see the "learn" button appear next to this lecture.

Nothing original Report this review
Pro Privacy ON (login to see reviewer names) on October 16th, 2019
There’s really nothing new in this act...

His take of the classic effect vanishing glass bottle with a funny Presentation using the classic method. Nothing really new

RING MAGIC
using some classic simple techniques to make 2 rings switch places. Then he does a phase of the classic Garett Thomas ring thing, he doesn’t even do it that good. Then There’s a ring though spectator’s finger which is not Very convincing.

A 3 phase ambitious card using the most basic slights that he “learned from his gym teacher.”

Using code breaker by Gregory Wilson (which he doesn’t teach) combined with his method of predicting someone’s entire phone number that do not require you to memorize the whole phone number, probably the only original thing in the lecture.

Over all, very Disappointed with the act, very expensive for what you get.
6 of 6 magicians found this helpful.
Did this review help you? 2 comments

Nothing new for anyone who's been doing magic for a while Report this review
Verified buyer Pro Privacy ON (login to see reviewer names) on November 11th, 2019
OK, here's the thing: I'm firmly in the camp that people who still hate Jibrizy because "he faked reactions" or "he coached his audience" should get over it. These same magicians who criticise him about this will use stock lines like "there are two ways of doing this, with applause or the way we're doing it right now" or "if that is their card I want you all to go nuts!". There is literally no difference.

With that said, I've tried to watch and review this ACT without any bias towards Jibrizy or his previous actions.

Let me be clear here. Jibrizy has chops. He certainly can entertain a crowd, and the audience he has in the performance video is certainly enjoying his act. However, if you're looking for anything new here you're going to be disappointed.

The vanishing bottle is a great opener, but there wasn't anything that didn't separate Jibrizy from any other magician that does the vanishing bottle. The ring routine is a standard piece that you'd probably do if you were asked to do some magic on the spot. The card routine is just an ACR. There's nothing wrong with this, but it's nothing really new.

Some things aren't even taught. If you want to learn the PIN divination then that's in another download (I would argue that it's credited incorrectly to Gregory Wilson rather than Michael Murray but I'll give the benefit of the doubt here).

The biggest crime that the one interesting thing that's in this act is the one thing that isn't taught. The finale that the bell that was rang all the way through the show whenever "something amazing happened" had the ring that vanished from the ring routine at the beginning. While it was fairly obvious what was happening when watching the show, it felt like an insult when you were told that the bell would be a separate product available to be purchased after the ACT. It ended up making the whole thing feel like an advert for the bell.

I really wanted to like what Jibrizy had to offer, but I learned nothing new from this. This ACT may be good for a beginner but it was certainly not informative for someone who's done magic for a while.
5 of 5 magicians found this helpful.
Did this review help you? Do you want to respond to this review?

Watch Jibrizy Perform Other People's Material... Report this review
Pro Privacy ON (login to see reviewer names) on October 19th, 2019
In this video--Jibrizy Live Act--Jibrizy doesn't credit any of the creators of the material he's performing.

Jibrizy performed (nearly word for word) and explained Patrick Redford's Psychokinetic Power found in Redford's book Pentagon. No mention of Patrick Redford. It would almost seem as if Jibrizy just reinvented the PK Touch (if you hadn't read Pentagon).

I wonder how innovators feel about Jibrizy showcasing and explaining their works in Jibrizy's Live video...and charging $39 for it.

What happened to magicians taking great care in honoring the creators? That's how it used to be.

I'll add a star to my rating to give Jibrizy the benefit of the doubt. Maybe he learned these tricks by seeing someone else do these tricks, so he doesn't know that the tricks he's doing aren't original with him.
5 of 5 magicians found this helpful.
Did this review help you? Do you want to respond to this review?

Disappointing Report this review
Pro Privacy ON (login to see reviewer names) on October 19th, 2020
He has energy that he puts into his performance, which can be entertaining. But for a lecture, this is highly disappointing. All other or old effects. Nothing original and no insight to performing. Can not recommend this at all
Did this review help you? Do you want to respond to this review?
Bestsellers