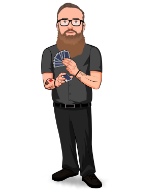 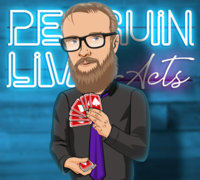 Today, when you order "Doc Docherty LIVE ACT", you'll instantly be emailed a Penguin Magic gift certificate. You can spend it on anything you like at Penguin, just like cash. Just complete your order as normal, and within seconds you'll get an email with your gift certificate.

Close up restaurant style performances that are easy to learn, and most of all makes the spectators feel like they did the magic!

Narlo’s Invisible Palm Aces- The spectator is the magician as they palm and transfer invisible Kings from one pile to another. To make it even better the spectator turns them into four Aces!

World Famous Salt(Sugar) Trick- a restaurant favorite where sugar vanished and reappears in a napkin. A great TT steal is used to create a stunning effect that can be recalled during the entire walk around set.

Card at Unknown Number- A random number is created but unknown until the deck is out of the magicians hands. Then the previously selected card is at that number!

Invisible Biddle- The classic Biddle trick where the spectator turns his card invisible as soon as they touch it!

The Vegas Test- The spectator is tested on wether or not a Vegas trip would be a good choice. The spectator passes the test with flying colors!

The Eagles Mean They Can Fly- Doc’s walk around coins across handling.

Super Easy Double Leaper- a new handling of a classic from Expert Card Technique that requires no palming.

In through the Outdoor- a classic puzzle , the In & Out boxes updated with a solid ending!!!

Card to Wallet- Doc’s favorite way to end a ACR is this. This handling gives a reason to bring the wallet into play and is very easy and can be done without a palm.

From North Carolina this is Doc’s second appearance the P3 studios. Doc has been performing and creating magic for over 25 years. From the early days at theme parks to street performing to corporate and private events Doc has had a wide variety of different audiences to hone his skills in the art of magic and sleight of hand.

Doc started performing magic around 9 years old. By 17 was hired to work at a Paramount Theme Park. There he was able to get real world experience by performing 8 shows a day. Learning about presentation and improv.

Years followed with countless restaurant and private gigs. In the early 2000s Doc opened up a magic store and followed by creating The East Coast Super Session which is now called TRICS held in Charlotte, NC every year.

Author of 3 books and creator of the spectacular Zoso Change and deceptive Groove Electric Switch.

Purchase this product and on October 20th anytime after 12:00pm Eastern, click the MyPenguinMagic area at the top of the Penguin site. You'll see the "learn" button appear next to this lecture.

very good Report this review
Pro Privacy ON (login to see reviewer names) on October 16th, 2020
very good
Did this review help you? Do you want to respond to this review?

live act Report this review
Verified buyer Pro Privacy ON (login to see reviewer names) on October 23rd, 2019
It is very rare that a show at Penguin is so poorly filmed even if Doc Docherty has a tendency to move out of the light...Some air conditioning seems mandatory in the future as the public is half naked and the magician is sweating a lot explaining may be two unsuccessful tricks at the first attempt. Otherwise very classical tricks (poker hand transfo, Biddle trick, ACAN, invisible palm, coin across, ambitious card...) with an accent put on spectator participation. Globally a bit disappointing...
2 of 9 magicians found this helpful.
Did this review help you? 5 comments
Bestsellers