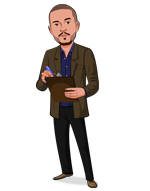 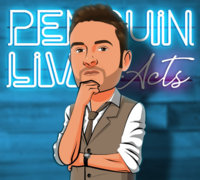 Today, when you order "Alexander Marsh LIVE ACT", you'll instantly be emailed a Penguin Magic gift certificate. You can spend it on anything you like at Penguin, just like cash. Just complete your order as normal, and within seconds you'll get an email with your gift certificate.

"Alex McAleer is one of my favourite mentalists. He knows more about presenting entertaining mentalism for real world audiences than almost anyone else I know." – Ian Rowland

"It’s hard to find your own voice in mentalism without sounding like you’re trying to copy Derren Brown but you succeeded splendidly." – Martin S Taylor (the Hypnotist who inspired Derren Brown)

Why You Should Never Play Cards with a Mentalist- Who says Mentalism with playing cards has to be boring?
The theme is all in the title 'Why You Should Never Play Cards with A Mentalist' as it demonstrates almost every trick in the mentalists arsenal (everything expect PK). I have been performing the act for 4 years, it is still a feature of my one-man show and a short version featured in my act in 'Champions of Magic' for several years. I created it because I was sick of other mentalists saying Mentalism with playing cards is boring so I tried to create the strongest and most direct mind reading act using nothing but playing cards!
Alexander Marsh takes his audience on a journey through almost every type of Mentalism effect and leaves them convinced that they really should never play card with a mentalist. As well as how each effect is achieved, Alexander will also discuss how and why he has structured the act how he has, and how this structure can be used to routine any effect, routine or full show.

Mind Reading of 5 Playing Cards- First he convinces his spectators he can expertly read their tells and reveal every single card in a poker hand.

Temporary Amnesia- Then he demonstrates his intimate knowledge of the human mind by causing a spectator to forget a thought-of-card and just as quickly brings the memory back. All with no sleight of hand, no hypnosis, and no stooging.

Tel-  Alex’s bold but practical billet technique to divine any 4-digit number.
3 Billets- Alex shares the work on his Billet Peek within a three person psychometry routine that makes the peek invisible.

Name A Card At A Given Number (2 methods)- Next he proves he really is a master of memory by rapidly memorising half the deck and naming the card at any given number and by knowing which randomly selected card has been moved in the pack. Alexander will even tip his method to allow a spectator to achieve this same minor miracle. All this is done using the simplest of methods and no memory work, allowing you to focus on your performance.

Card Calling/Memory of Half the Pack- The other half of the deck is distributed among the audience and having memorised one-half of the deck, Alexander names all these unseen cards getting the whole audience involved in the act. This requires the bare minimum of memory work and can be mastered in no time at all.

Card Prediction- Finally, in his inimitable style Alex gets a huge reaction for the revelation that he really did know a card merely being thought of all along. His handling and tips on using this often dismissed method has made many performers reconsider this classic tool.

Alexander Marsh is the pen-name of professional mentalist Alex McAleer, who has been a working performer since 2007.

Under his pen-name, Alex has written several books including ‘Hybrid Mentalism’ and ‘Head Wired’, he has lectured at the prestiges Magic Circle, and contributed to several other mentalism publications including works by Jerome Finley, Elliott J. Bresler, and Banachek.

In 2014 Alex took his one-man show to the Edinburgh Festival Fringe and three shows to Australia’s Perth Fringe World Festival in 2016 and 2017 where he was nominated for the cabaret award. Since 2014 Alex has toured extensively with the ensemble illusion show ‘Champions of Magic’ completing 6 UK tours including a run in London. The show has been touring North America since 2017 and continues to do so.

Purchase this product and on November 10th anytime after 12:00pm Eastern, click the MyPenguinMagic area at the top of the Penguin site. You'll see the "learn" button appear next to this lecture.

Entertaining and Informative Report this review
Verified buyer Pro Privacy ON (login to see reviewer names) on November 11th, 2019
I’ve only seen Alex perform through a couple of the download items from Penguin Magic.

What has struck me is how entertaining and enjoyable the items have been. This takes it up a notch seeing him perform a 30 minutes act. Mostly cards, but he does throw in a couple of billet work effects for good measure.

What you will learn from this act is how Mentalism can be Entertaining IF presented in the right way. Alex uses a lot of easy to do effects that allows him to fully concentrate on entertaining the audience.

Even though most of this can be classed as easy to do, they still leave a long lasting impression on an audience. Top Class job Alex!
5 of 7 magicians found this helpful.
Did this review help you? Do you want to respond to this review?

Full Act in Your Pockets Report this review
Verified buyer Pro Privacy ON (login to see reviewer names) on March 29th, 2021
This is pure worker gold. Alexander shows it comes down to PERSONALITY and NOT props. You can tell his card act is honed from thousands of performances. This routine plays HUGE!

Oh, and the killer billet stuff is a MAJOR bonus.

So much great information here. Well worth studying!
1 of 1 magicians found this helpful.
Did this review help you? Do you want to respond to this review?

Alexander Marsh Live Act Report this review
Verified buyer Pro Privacy ON (login to see reviewer names) on May 3rd, 2020
One of the best lectures that I have seen, and I have seen 19 acts so far. Great personality and audience connection. Great routines with well thought thru layers. Well organized and explained
Great for all levels and interests. Gets you to think beyond the mere card trick(s) and shift the focus to personalities etc
What a pleasure

Real material from a real professional Report this review
Verified buyer Pro Privacy ON (login to see reviewer names) on November 13th, 2019
My favourite penguin live of all time, bar none.

For ten years Alexander Marsh has been hands down my favourite creator. His routines aren't theories, they're tested hundreds of times in front of tough paying audiences, and it shows in the structure, pace, and delivery.

I'd hazard a guess to say there's probably not a single gig I've done in the last decade that doesn't have one of his routines front and centre.

If you want a lecture that has things you'll actually use, jump on this one. Can't wait to try it out soon.
Did this review help you? Do you want to respond to this review?

Great subtleties and a act Report this review
Verified buyer Pro Privacy ON (login to see reviewer names) on November 12th, 2019
My wife and I were there for the act, it was amazing and an absolute blast (If you're interested, I'm the dude in the camo jacket who says the PIN code and my wife is Brianna, the one who had the joker in the memorization bit). As soon as this went up for pre-order, I knew I had to buy it.
Alex has a great personality, very fun and funny, and everything in this act has a purpose; it's not just one effect after another, it's cohesive, flows perfectly, and has a great call-back ender.
What Alex teaches is genius, especially his take on a well known move. The subtleties that he teaches are worth the price alone. Nothing here is difficult, but everything here is practical.
Did this review help you? Do you want to respond to this review?

average Report this review
Verified buyer Pro Privacy ON (login to see reviewer names) on November 13th, 2019
Another one of those boring mentalist acts were you need not watch the answer questions bit because you know how everything is done
3 of 7 magicians found this helpful.
Did this review help you? Do you want to respond to this review?

Good Ideas Report this review
Verified buyer Pro Privacy ON (login to see reviewer names) on November 17th, 2019
Good information about billet peeks. Maybe you already knows the effects but you can find some Good points on presentation.
1 of 3 magicians found this helpful.
Did this review help you? Do you want to respond to this review?

Live act Report this review
Verified buyer Pro Privacy ON (login to see reviewer names) on November 13th, 2019
Small detail...In the poker demo it will be better to remove the queen of heart in one of the two hands either in the "princess" hand or the spectator's hand!
1 of 5 magicians found this helpful.
Did this review help you? Do you want to respond to this review?
Bestsellers